Terrible fans impaired Brock Osweiler during Monday night’s game, and the NFL needs to have answers 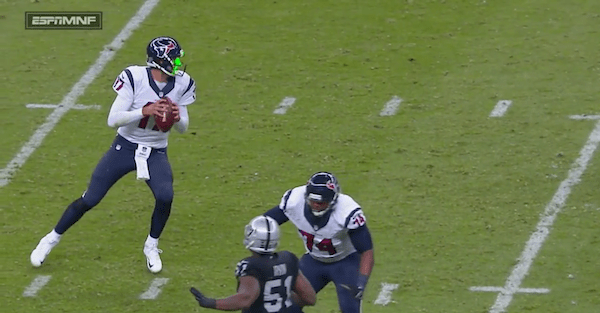 During the Houston Texans’ 27-20 loss to the Oakland Raiders on Monday Night Football, a fan impaired quarterback Brock Osweiler’s vision by shining a laser in his eye.

Osweiler dropped back for a pass and a green laser was directly in his eye while he was preparing to throw the ball.

While it may be difficult finding the fan who was responsible for the act, the NFL needs to step in and take precautionary measures to ensure it doesn’t happen again. It could impact the entire game and the quarterback’s vision.

Besides, Brock Osweiler has enough trouble throwing the ball to his receivers anyway.