The Bears may be zeroing in on a Jay Cutler replacement 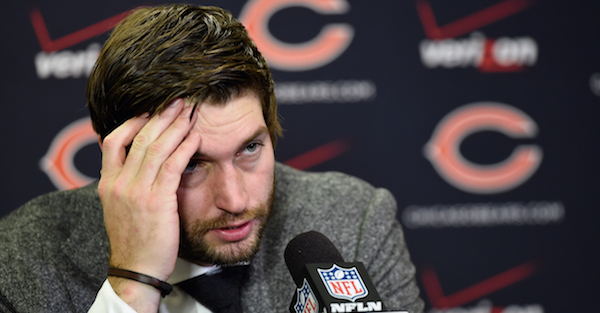 It?s easy to roll your eyes at Glennon because he hasn?t been a full-time starter in the NFL since the 2014 season. But in a quarterback starved league, the 27-year-old ? who has twice as many touchdowns (30) as interceptions (15) in his career ? could be a more appealing option than some of the retreads. (Jay Cutler, anyone?)

Related: Jay Cutler may retire instead of doing this

One team seems to have the edge for Glennon’s services.

From what I heard at the NFL combine, the Bears will be the team that pushes hardest for QB Mike Glennon.

That makes some sense. The Bears are done with the strong armed but erratic Cutler, and if they can’t trade hi, (nearly impossible), they’ll release him (far more likely).

Wherever Glennon ends up, he?s going to get mad money.  The Buccaneers offered him crazy cash to stay put as the backup to Jameis Winston:

A little more detail to earlier story: #Buccaneers offered QB Mike Glennon $8M per yr to stay as backup. Would have been top paid backup

Several reports speculate Glennon could get up to $15 million a year as a starter.

The Bears are going to have competition. In addition to Tampa, the perennially quarterback challenged New York Jets plan to make a big push for the big (6-foot-6) quarterback.