The Bills make a stunning statement about their quarterback, and it has to be a negotiating ploy 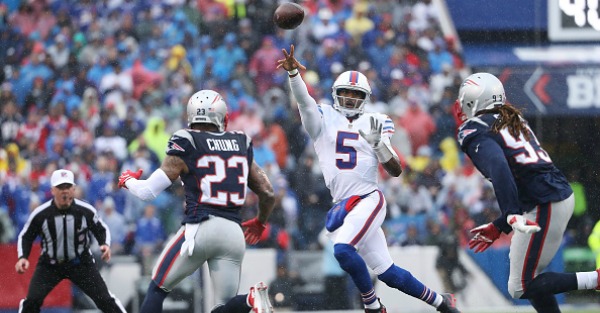 That’s what a report in the Buffalo News says.  The story examines what the Buffalo Bills would do if it decides to move on from Tyrod Taylor, and there’s this line:

… they might be inclined to follow through with a plan that is thought to be appealing to at least one member of their hierarchy, General Manager Doug Whaley, and that is going with Cardale Jones as the starter.

After the initial reaction of, “WHAT?!?,” it’s pretty clear this is a negotiating ploy.

If the Bills pick up the option for Tyrod Taylor, last season’s starter,  Buffalo will owe him $30.75 million guaranteed.  (Buffalo has until March 11 to make a decision). The relationship between Taylor and the team has been contentious, ever since the team hinted Taylor had hernia surgery without its permission.

Taylor, 27, has made it clear he isn’t interested in reducing his pay, but NFL.com reports that he’s willing to alter his contract to help out the Bills by giving them more space under the salary cap.

Taylor has thrown for more than 6,000 yards, with 37 TDs against 12 INTs over the last two seasons. Last season, his QBR was ninth on the NFL. You can argue whether he’s worth the money, but in a quarterback starved league, it would be odd to cut a starting-caliber quarterback in exchange for Jones, a fourth-round pick whose total experience is less than one half of a meaningless game last season (and went 6-11, 96 yard, 1 INT).