Even with Sam Bradford gone, there’s another QB controversy brewing in Philadelphia 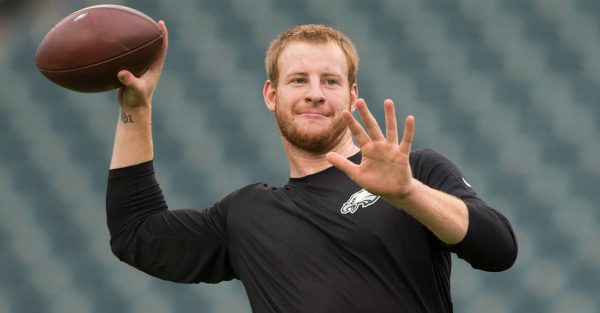 Sam Bradford has gone to the Vikings, which means Philadelphia has a new starter. But even though they’ve voiced support of backup Chase Daniel, they’re going to play a rookie who’s only played in one preseason game.

The Eagles traded Bradford to Minnesota, who hopes the former Oklahoma star will help salvage the season since Teddy Bridgewater is out for the year. But instead of starting Daniel, they’re going to start second-overall draft pick Carson Wentz if he’s healthy enough.

RELATED: Here’s why the Vikings paid so much for Sam Bradford

Pro Football Talk reports Eagles head coach Doug Pederson has faith in Daniel, who’s started only two other games previously. Daniel threw for 332 yards and one touchdown with two interceptions in four preseason games. Wentz, who’s been the No. 3 quarterback since camp opened, suffered a big hit in the Eagles’ first preseason game and hasn’t played since.

Daniel was reportedly extremely upset when told of the decision, and it’s hard to blame him since he was the main backup. You just hope this doesn’t become another soap opera, lke when Bradford sulked after the team drafted Wentz.

But the fact is he’s not who the Eagles have bet their future on, and for better or worse, the Wentz era starts now.