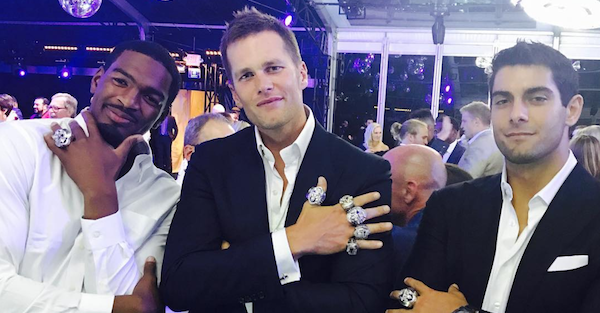 The New England Patriots received Super Bowl rings for their historic comeback win over the Atlanta Falcons in Super Bowl LI, and the rings have 283 diamonds in them.

Why 283? Well, that is a not-so-subtle nod to the Patriots infamous 28-3 deficit against the Falcons. The Pats stormed back to win the game 34-28 in overtime.

Here’s a look at the ring, which also has “Greatest Comeback Ever” on the inside.

Patriots confirm that there are 283 diamonds in new champ ring. They were, of course, down 28-3. pic.twitter.com/XkVW5669an

The Pats are no strangers to throwing shade at opposing NFL teams. Josh Kraft, son of owner Robert Kraft, recently said the Patriots’ Hall of Fame is much better than the New York Jets’ Hall of fame, which is “nonexistent.”

Related: The New England Patriots just piled on to the misfortune of a lowly rival

The 28-3 comeback was one of the best in sports history, and the Patriots will never let the Falcons forget about it.

The Patriots host the Falcons on Oct. 22, so Falcons players and fans will be reminded of the comeback several more times between now and then.