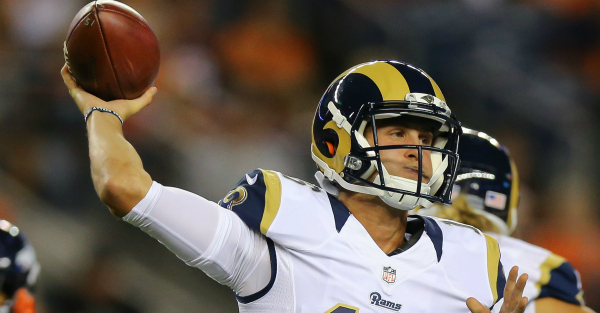 Rookie quarterbacks Carson Wentz and Dallas Prescott started for their teams in Week 1 games, but the No. 1 overall pick in last year’s draft was nowhere near the field on Sunday.

Jared Goff, who was the top pick out of UCLA by the Los Angeles Rams last spring, wasn’t even active in Monday’s 28-0 loss to San Francisco.

Instead, the Rams started Case Keenum, who threw for 130 yards and two interceptions in the game. Keenun battled in the preseason for the starting job with Sean Mannion, who was named the team’s backup.

So why isn’t Goff in the mix? It might not have anything to do with his performance.

According to Keyshawn Johnson, Los Angeles head coach Jeff Fisher didn’t even want to draft him.

Johnson, who was the No. 1 pick in 1996, said on The Stephen A. Smith Show that Los Angeles drafted Goff to make a splash.

“From my outside people and the inside people that I know with the Rams, that wasn’t the choice that Jeff Fisher really wanted,” Johnson said. “I think he was basically forced to draft Jared Goff.”

Johnson said he thinks Fisher really wanted to build the roster with more draft picks in order to have more players. Instead, Los Angeles traded away several picks, including two 2017 draft picks, in order to draft Goff.

Fisher said after Sunday’s loss that Keenum’s performance didn’t hurt his status as the team’s starter… which isn’t exactly good news for Rams fans if such a performance is deemed acceptable.

It’s also bad news for Goff, because it doesn’t look he has even a slight chance at seeing the field.