The Vikings say they’re confident in the mediocre Shaun Hill, but really, they’re panicking a bit 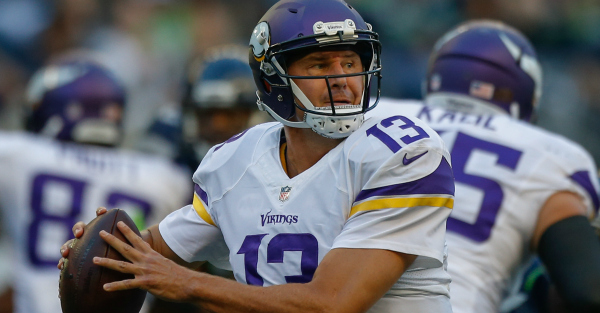 Minnesota has voiced its confident in Shaun Hill, but that confidence apparently doesn’t mean they’re done looking for a replacement for Teddy Bridgewater. Despite head coach Mike Zimmer voicing support for Hill, general manager Rick Spielman says the team is looking for a quarterback.

RELATED: The Vikings have found a new starting QB, and he’s not going to inspire confidence

According to 1500 ESPN in Minneapolis, Spielman said the team is looking to find a backup option for Hill — or even a potential starter. The GM said he doesn’t want to give away too many draft picks, though, if they a trade for a quarterback. And that may be hard to accomplish, especially this close to the start of the season.

“We are in a position where we are trying to find potentially a quarterback in 48 hours,” Spielman said. “How many teams are going to give up a significant (quarterback). They don’t fall out of trees. If you have one, you sure aren’t going to give one up.”

Hill is a career journeyman and was Bridgewater’s backup last year. He played in one game last year (a 21-18 win over St. Louis) after Bridgewater left with a concussion.

Zimmer complemented Hill’s experience and fast learning ability early in training camp. Though he said he’s confident in both Hill and the team, the organization sure doesn’t seem to feel the same way if they’re trying to get another quarterback by the end of this week.