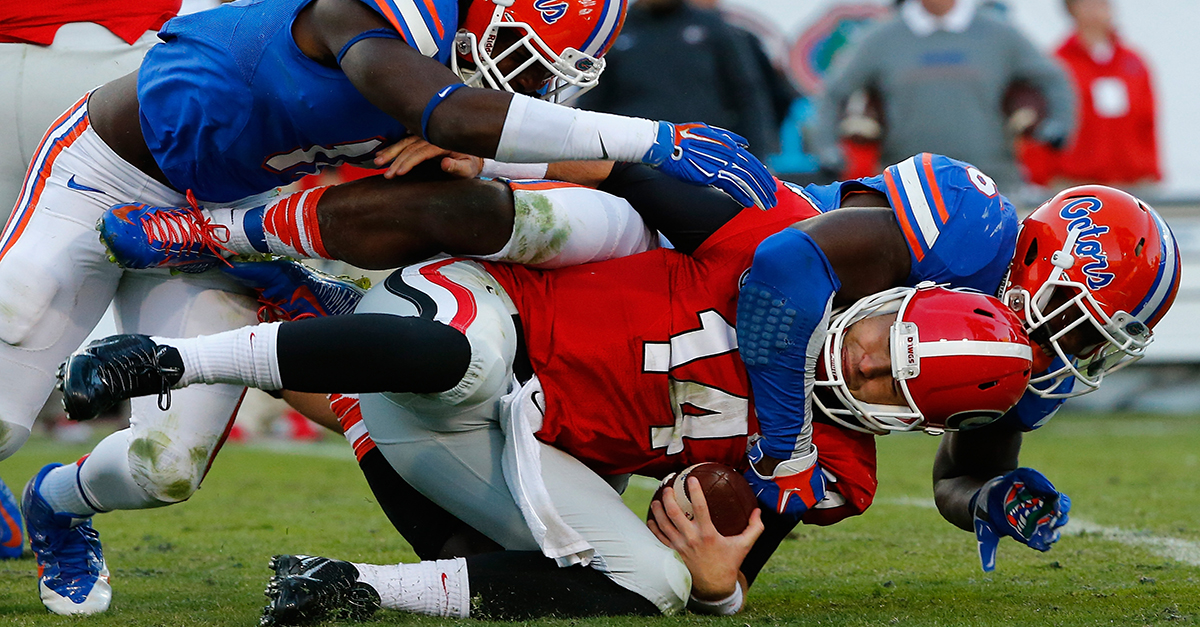 The NFL combine kicked off on Tuesday, but on-field workouts don’t begin until Friday. Players are already in Indianapolis getting their measurements evaluated, meeting with the media and meeting with individual teams. Below is a list of SEC players who are the most intriguing prospects from their respective schools.

Amari Cooper is projected as the top receiver in the NFL draft, but he needs to watch out for West Virginia WR Kevin White. White has been steadily climbing draft boards, and if he has a dominant performance at the combine, he could overtake Cooper as the top receiver taken. However, no receiver out of the very loaded class can run routes like Cooper can. Route-running is the single most important attribute to have as a receiver. NFL draft analyst Mike Mayock compared Cooper to soon-to-be Hall of Famer Torry Holt. Cooper is the real deal.

Flowers probably won’t be selected in the first round, but teams in the second or third round will get tremendous value when he hears his name called in the draft. Flowers had a pretty good season for the Razorbacks and had his best game against Alabama, which helps his film. But he isn’t an elite speed rusher. However, he did show off how athletic he is by doing this ridiculous 55-inch box jump. That should get scouts buzzing.

We all know that Sammie Coates is a very speedy receiver, but his hands are a major concern. Yes, he was Auburn’s leading receiver for the past two seasons, but he needs to prove to scouts that he isn’t just a deep threat and can catch everything. At one point last season, Coates accounted for 40 percent of Nick Marshall’s incompletions. That’s…not good. But if he balls out at the combine, Coates can sneak into the first round. If not, Coates should go in the second round.

Whomever drafts Dante Fowler Jr. is getting an animal. This guy seems to be in the backfield on every single play. He can play with his hand in the dirt or standing up and lining up everywhere on the field. There were times where Florida lined him up right over the center to rush the quarterback. He can do it all. He is projected as a top-10 pick. NFL draft analyst Mike Mayock said Fowler reminds him of Kansas City Chiefs LB Justin Houston. Houston led the league with 22 sacks last season, if that tells you how special Fowler Jr. is.

Todd Gurley will not be participating in drills at the NFL combine. He tore his ACL late in the season. However, he has some work to do in his individual meetings with teams. He’s going to be picked apart for his suspension for signing autographs. Teams will probably want to know why he did it, knowing it was against the rules and would hurt his teammates if he got caught. He also needs to show teams that his work ethic is unparalleled and that he’s going to do everything he possibly can to get back on the field. To me, even with the ACL surgery, Gurley is the best running back in the draft. I think he’s going to be a top-five back in the NFL.

Bud Dupree is one of my favorite prospects in this year’s draft. I think he’s going to shoot up draft boards when he finishes up this weekend at the combine. He was a four-year starter at Kentucky and proved himself to be one of the best defensive end prospects this year. Like Fowler, Dupree has a tremendous ability to always be in the backfield. That’s something that can’t be taught. He gets off the edge fast to disrupt quarterbacks and fills up gaps before offensive linemen can get a hand on him. He reminds me of DeMarcus Ware.

Collins played left tackle at LSU, but projects as a right tackle or guard in the NFL. He isn’t athletic enough to be a left tackle. He has superior run-blocking skills and is capable of dominating opposing defensive linemen. A good performance at the combine can shoot him up some draft boards.

McKinney is tall and has good size for a linebacker, but he lacks speed. He is a tremendous tackler and has solid coverage skills for a linebacker. The only problem with McKinney, though, is he needs to be a part of a talented defense. He isn’t a guy you draft to change your defense. He is, however, a nice solid piece.

Out of over 300 players at the NFL combine, I believe no one has more to lose and more to gain than Dorial Green-Beckham. Before you ask, I am classifying him as a Tiger because he didn’t play a single down at Oklahoma. To me, DGB is more physically gifted than Amari Cooper. He is 6-foot-6 and 225 pounds. However, he hasn’t played football at real speed in 13 months, which hurts him. He was kicked off Missouri’s team and has had two run-ins with the law. This guy needs to prove his skills on the field, but more so, when he meets individually with teams, he needs to show them that he has changed and has learned from his mistakes. He has the talent to be on the same level as Calvin Johnson, but the same off-the-field issues to make him the next Josh Gordon.

Prewitt is one of the highest rated safeties in this year’s draft class, but the position is one of the weakest this year. He has very good size (6-foot-2, 215 pounds) to be a free safety in the NFL. He is a very good open field tackler, but lacks speed and was burned with ease by some receivers. It’s also alarming that he regressed as a senior. He needs to show scouts that he has been working hard since the season ended.

Cann isn’t elite, by any means. But he is going to be a solid player in the NFL. Cann is powerful and has brute strength. However, he doesn’t have one elite trait, which hurts his draft stock. He needs to work on his agility.

If Ogbuehi didn’t tear his ACL, there’s no doubt that he would be a top 15 pick. But with his injury, he will most likely be drafted late in the first round or slip into the second. He did receive some great news at the combine. Ogbuehi was measured to have the second longest arms, which is huge for offensive tackles. The longer your arms, the easier it is to keep pass rushers away from you. He is athletic and powerful, but at this point, it’s unclear if any team will risk a high pick on an injured lineman and a player whose effort was questioned in 2014.

Note: Tennessee did not make the list because its only player, Justin Coleman, is not a very intriguing prospect right now. He’s projected to go in the sixth-to-seventh round. Vanderbilt had zero players invited to the combine.

To get a full list of the prospects and see the full schedule of events, click here.