These are the top 5 coaches in the NFL, and it isn’t close 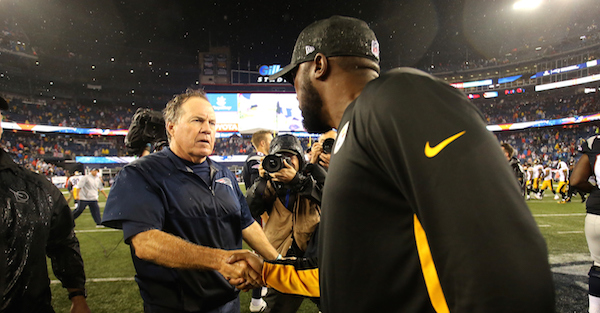 With 32 teams in the NFL, there are more than a few coaches who routinely make the playoffs, have taken their teams to heights no one expected and who can keep the ball rolling—even after losing key players to season-ending injuries.

Not everyone can be considered amongst the best coaches in the NFL, but these are five of a special breed and their place at the top cannot be denied.

RELATED: Bill Belichick?s response if Brady can lose his job to Jimmy Garoppolo is vintage Belichick

In a very short amount of time, Bruce Arians has made his mark in the NFL as a great head coach. Before taking the Arizona Cardinals from an after thought to the front of the NFC’s mind, he took over as interim coach for the Indianapolis Colts in 2012, going 9-3 as head coach and winning AP Coach of the Year.

The Cardinals took notice of Arians’ coaching prowess and haven’t looked back since. With only 60 regular season games under his belt, he’s won over 70 percent of them. He doesn’t seem to be in the mood to slow things down, either.

Say what you will about the Steelers’ fan base; Mike Tomlin is a huge reason for why it remains to be as rabid as they come. Tomlin started his career off with early success, winning the Super Bowl in just his second year. He’s since been back to the big game only once in 2010, losing to the Green Bay Packers but he still keeps the Steelers in annual Super Bowl contention, even in the ultra-competitive AFC North.

Even though the Steelers have missed the playoffs three times under Tomlin (2009, 2012, 2013), they’ve never had a losing season under his watch.

Pete Carroll is one run-play away from being one of two coaches to have multiple Super Bowl victories, having gone to back-to-back Super Bowls and nearly knocking off two of the greatest quarterbacks football has ever known. Alas, his over thinking at the end of XLIX cost he and the Seahawks greatly.

Still, that doesn’t take away from what he’s achieved in such a short amount of time. Since 2010, the Seahawks have the fifth-highest win percentage in the NFL and is one of three teams with multiple Super Bowl appearances.

Some how, Mike McCarthy is very underrated. Maybe having the best quarterback in football takes off some of the steam, maybe it’s the recent failures after deep playoff runs. Still, since 2006, McCarthy has been one of the best. With a 104-55-1 record, McCarthy has the second-highest wining percentage (New England) for coaches with more than 100 victories.

Under McCarthy, the Packers haven’t missed the postseason since 2008–their first year under Aaron Rodgers–winning Super Bowl XLV.

As if there’s ever any doubt who the top coach in the NFL is, let’s put that to rest. Not only is Belichick the longest-tenured coach in the NFL, he’s also the most successful, winning an absurd 73 percent of his games while winning six AFC championship games, four Super Bowls, three AP Coach of the Year awards and securing 13 playoff berths in 15 seasons with New England.

If you’re of the ilk who likes to point out that he has sure-fire hall of fame quarterback Tom Brady, just remember the Patriots went 11-5 in 2008 after losing Brady to a torn ACL in week one.

Belichick is the undeniable king of NFL coaches.