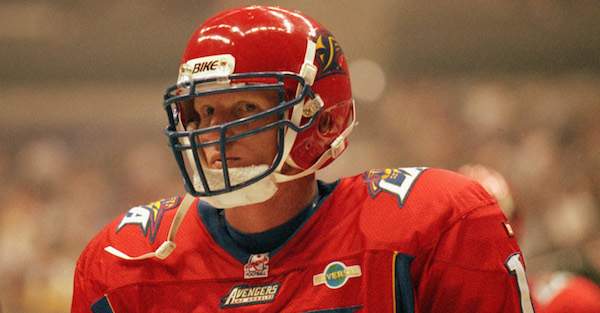 Kellie Landis/Getty Images
LOS ANGELES -JUNE 29: Quarterback Todd Marinovich #12 of the Los Angeles Avengers walks on the field during a Arena Football game against the Milwaukee Mustangs at the Staples Center on June 29, 2000 in Los Angeles, California. The Mustands won 64-52. (Photo by: Kellie Landis /Getty Images

Todd Marinovich is most famous for being an NFL bust and there is no way around that. The former first round pick of the then-Los Angeles Raiders flamed out in spectacular fashion and, when combined with the hype that his father placed on him as a prospect, Marinovich became a punching bag.

Now, more than 20 years after retirement from football, Marinovich,  now 48. will be attempting a comeback of sorts in that he will play for the SoCal Coyotes of the World Developmental Football League. ESPN brings word from Marinovich, who is also battling the road to recovery from addiction and indicates he has been sober since 2016.

“I can’t really take credit for anything. The only thing that I was given was the gift of desperation, which it takes to get started. And I am a work in progress. God works in ways that I never really saw until I moved to the desert. I had no idea what I was getting myself into. I just knew I needed help and that I couldn’t do it alone.”

Marinovich also spoke openly about the reasoning behind his attempted comeback. “Recovery has changed every aspect of my life and made it better,” he said, “so why wouldn’t that carry over to the football field?”

The 16-team league serves as a developmental training ground for players and, in an interesting twist, Marinovich was actually an assistant coach during his team’s previous season. It is hard not to root for success in this situation and, even if the football part of this is minimal in terms of the overall perspective, Todd Marinovich seems to be finding much-needed refuge.