Tom Brady gives his take on controversial end to Steelers-Patriots 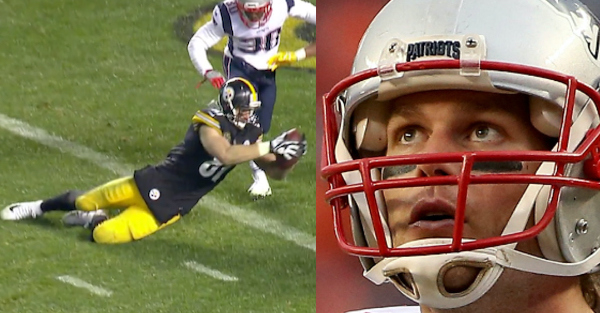 The rules have been quite clear — if you don’t complete the catch all the way through hitting the ground, it’s an incomplete pass.

Despite that notion, Jesse James’ non-catch, there was plenty of controversy around the ending between the Pittsburgh Steelers and New England Patriots. After James’ touchdown was overturned, quarterback Ben Roethlisberger threw an interception on a wacky final play and the Patriots survived, 27-24.

"I saw it on the big screen, probably the angle they saw, and as soon as I saw it I felt like he obviously didn't … survive the ground." — Tom Brady, on @KirkAndCallahan, on overturned Steelers TD

After the game, Roethlisberger was clear on the final play — it wasn’t his fault:

Ben Roethlisberger says there was a difference of opinion on #Steelers final play. "It wasn't a fake spike. I was yelling 'clock it' b/c I felt that was the thing to do, to clock it and get yourself one play. And it came from the sideline: 'Don't clock it, don't clock it.'"