Trading for Jimmy Garoppolo is going to be insanely expensive 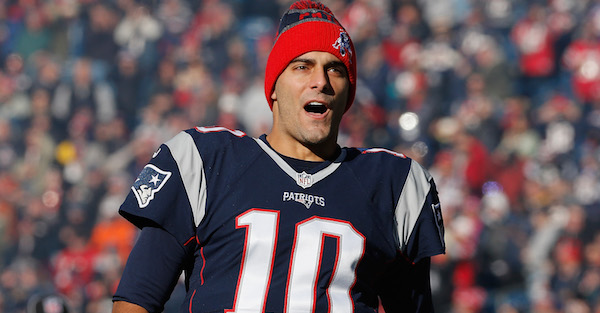 The New England Patriots are still interested in trading quarterback Jimmy Garoppolo, but they have a very high asking price according to NFL.com’s Mike Garafolo.

Related: Despite what they may say, Patriots reportedly making big offseason plans

The Cleveland Browns still have interest in Garoppolo, but Cleveland.com’s Mary Kay Cabot reported the Browns are unlikely to deal two first-round picks for him.

“Despite a report by ESPN that the Patriots won’t trade Jimmy Garoppolo, I’m told that nothing has changed and that teams — including the Browns — will still try to land him,” Cabot wrote.

“One source told me he believes it might take as much as a No. 1 this year and No. 1 next year — which I’m sure the Browns won’t be willing to do. But if New England will accept their No. 12 overall pick and maybe another later selection, I think the Browns would strongly consider that.”

Cabot said a scenario where the Browns end up with Garoppolo and defensive end Myles Garrett would be ideal.

Garoppolo has one year left on his rookie contract.