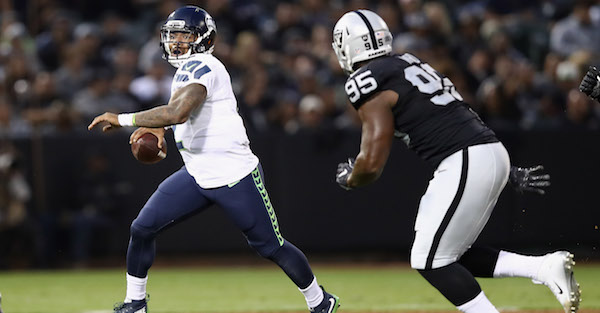 Trevone Boykin is no longer a member of the Seattle Seahawks, and as it stands, he currently doesn’t have an NFL team.

The Seahawks have announced, via Twitter, that Boykin has been cut. In fact, they’ve announced that he’s been cut along with multiple other players.

We've made the following roster moves, setting our roster at 53.

The release of Boykin is not a huge surprise, especially considering his recent off the field transgressions.

Boykin was arrested back in March of 2017 after he was the passenger of a car that crashed into a Dallas bar. While that offense in itself wasn’t illegal, because he wasn’t driving, Boykin was arrested for public intoxication as well as possession of marijuana. That was Boykin’s first arrest in connection with that incident, but oddly enough, it wasn’t his last. He was arrested 11 days later due to a violation of probation. Reportedly, he was on probation the night of the first arrest.

Seattle’s decision to let Boykin go was likely made easier by his play this preseason for the Seahawks. In four games, he completed only 30-of-50 passes for 410 yards, two touchdowns, and four interceptions.