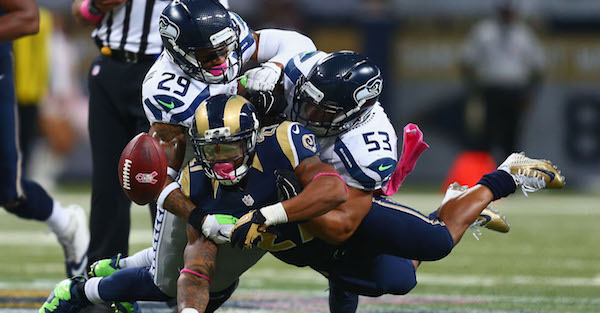 LA Rams running back Tre Mason hasn’t had the easiest time since being selected in the third round of the 2014 NFL Draft, especially not recently.

RELATED: The latest story involving Tre Mason is by far the most bizarre

He’s had five encounters with police in 2016, including an incident in July where he reportedly made ?irrational statements? when his mother called the cops on him. A police report from that incident claimed he was not able “to make decisions at this time? before he was transported to a hospital.

His mother, Tina, is providing even more context to Mason’s strange story, claiming that football is the reason for her son’s mental state.

According to TMZ, when officers told Mason he should focus on playing football, Mason’s mother’s response was to the contrary.

“No, he actually shouldn’t,” she said. “Because this is the [side of] football that nobody knows about.”

TMZ also reports that Mason’s family saw an obvious change in his behavior after the 2015 season. Mason’s mother’s assertion is another blow to the NFL in terms of the discussion surrounding head trauma and concussions.

Most recently, Mason was charged with operating an ATV on public roads to continue his string of bizarre behavior.