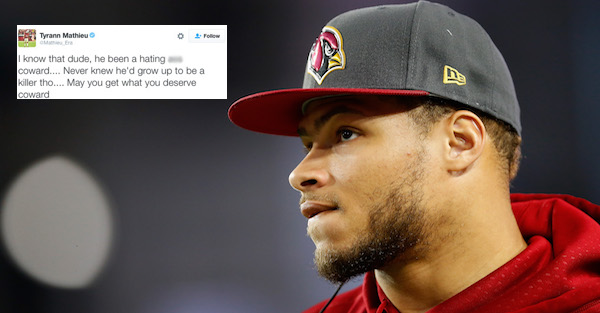 GLENDALE, AZ - DECEMBER 27: Free safety Tyrann Mathieu #32 of the Arizona Cardinals walks the sidelines during the fourth quarter of the NFL game against the Green Bay Packers at the University of Phoenix Stadium on December 27, 2015 in Glendale, Arizona. The Cardinals defeated the Packers 38-8. (Photo by Christian Petersen/Getty Images)

Tyrann Mathieu launched a Twitter tirade on Sunday against the man, Cardell Hayes, that’s been accused of killing New Orleans Saints defensive tackle Will Smith in a road-rage incident.

That reportedly didn’t sit well with Hayes’ relatives, who have since handed out death threats to Mathieu, per CBS:

“I think it was one of those situations where he was really at the wrong place at the wrong time, and he bumped into the wrong person,” Mathieu told the Rich Eisen Show. “I know the guy personally and, Rich, it’s not really for me to put his personal business on air. Because when I came out yesterday and called him a coward, I received death threats from guys in New Orleans — from his relatives. And I’m thinking to myself … ‘What do you guys want from me? I’m only here to speak the truth.'”

On @RichEisenShow, New Orleans native @Mathieu_Era said relatives of the man who shot Will Smith have threatened himhttps://t.co/nlwyuDJQ4A

Here are the tweets that reportedly riled up Hayes’ family: