Von Miller may be in a contract battle with Denver, but he won’t use the nuclear option 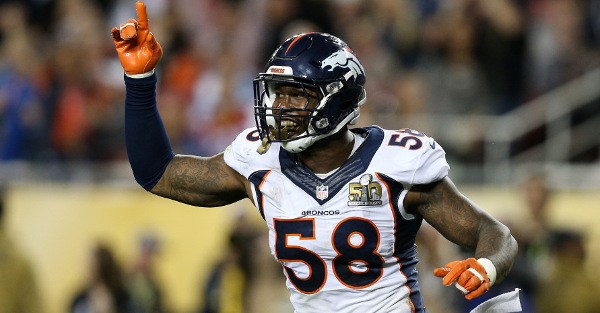 during Super Bowl 50 at Levi's Stadium on February 7, 2016 in Santa Clara, California.

RELATED: Von Miller trolls John Elway in midst of contract dispute, and that is not a good look

The Denver Broncos and Von Miller are at quite the impasse, though it seems inevitable both sides will come to an agreement sooner, rather than later.

Miller, last season’s Super Bowl MVP, was franchise tagged by the Broncos after contract discussions broke down. Miller was recently reported to have been offered Miller a contract work $114.5 million, six-year deal–which he turned down because he’s not happy with the guaranteed money (just over $38 million).

Even with the subtle jabs at John Elway, Miller seems to not only want to play with Denver, he wants to be a lifer.

“I want to be a Bronco forever,” Miller said on Chelsea Handler’s Netflix show, when asked about the current state of contract negotiations.  Miller also threw cold water on reports he would hold out this season; so much for the nuclear option.

A player of Miller’s caliber doesn’t come along often and having come off a Super Bowl win, you’d think things would be easy for Denver in settling negotiations. Alas, things are never as black and white as they seem (or should be).