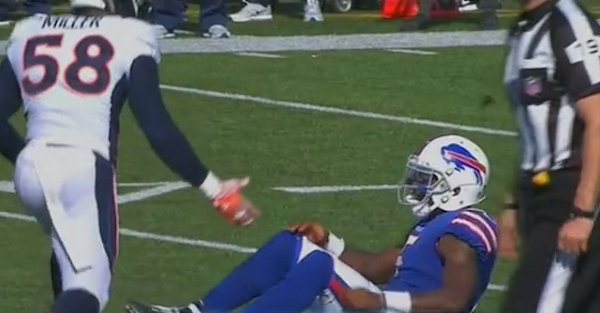 The Denver Broncos fell to the Buffalo Bills 26-16, and it’s in part thanks to this horrendous call.

Von Miller got a nice hit on Tyrod Taylor, then faked out helping him up. As both appeared to laugh about it, a ref hit Miller with an unsportsmanlike conduct penalty, awarding the Bills 15 yards.

The move helped the Bills move forward and hit a field goal, distancing themselves and essentially costing Denver a shot to even get close.

Von Miller getting flagged for that is a disgrace.

That Von Miller penalty might be the worst I've ever seen. Seriously. Both guys were laughing. That's inexcusable in that spot. Inexcusable.

Von Miller just got an unsportsmanlike conduct penalty for doing the "too slow" move, pretending to help up Tyrod after 3rd down stop. Mercy

Sure looked like both guys were laughing about it, too. Man.