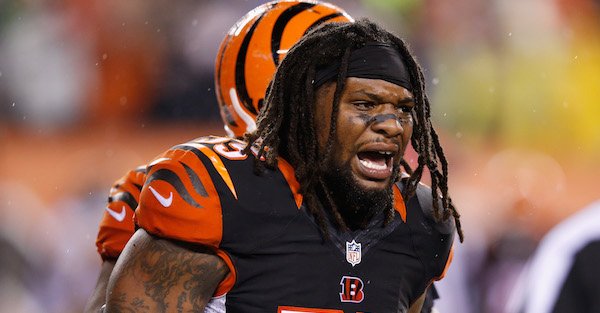 The NFL has released an official statement regarding the suspension of Cincinnati Bengals linebacker Vontaze Burfict, which has been reduced from five games to just three.

The NFL's official statement on reducing Vontaze Burfict's suspension from 5 games to 3: pic.twitter.com/lz2ZKQxnY4

Burfict’s suspension was reduced from five games to three by appeals officer James Thrash. The linebacker was suspended for landing an illegal hit on Chiefs fullback Anthony Sherman on Aug. 19.

Burfict had previously served a three-game suspension in 2016 for violating player safety rules following an incident in a 2015 playoff game against the Pittsburgh Steelers.

The NFL has fined Burfict nearly $800,000 for 16 unnecessary roughness penalties throughout his first five seasons. He will miss the Bengals first three games against the Baltimore Ravens, Houston Texans and Green Bay Packers, but will be eligible to return against the Cleveland Browns on Oct. 1.