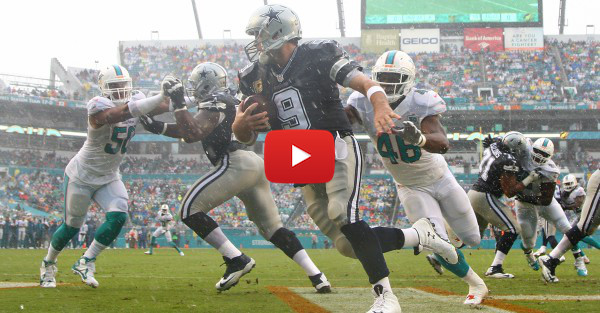 Tony Romo returned to action for the first time in two months Sunday, leading the Cowboys to a 24-14 win over the Dolphins.

The 13-year veteran quarterback didn’t waste anytime before pulling off a classic Romo move either,  completing his first pass in spectacular fashion. Romo scrambled into the back of the end zone, switching the ball from his right hand to his left hand on the run, before completing a crafty shovel pass to Darren McFadden.

Romo went down with a collarbone injury in Week 2 and Dallas (3-7) didn’t win a game in his absence. Sunday’s win over Miami (4-6) snapped a seven-game losing streak for Dallas (3-7), the longest such streak since 1989. Romo went 18 for 28 for 227 yards, throwing two touchdowns and two picks in the win.