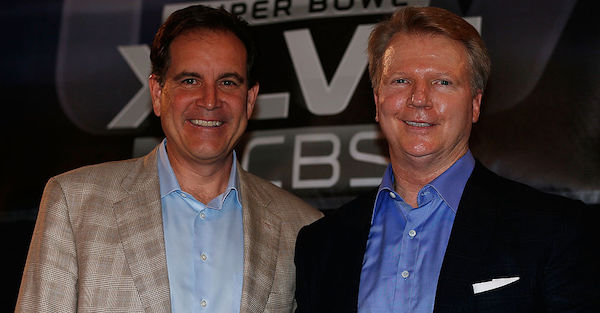 When CBS announced it had hired Tony Romo as the color commentator to its top NFL broadcast with Jim Nantz, it sent an awfully clear message to Phil Simms.

Prior to the Romo announcement, Simms was the color commentator with Nantz, but he was replaced after Romo decided to retire from the NFL.

Simms’ son, Chris, said his dad was shocked by the decision, and the Nantz was definitely involved with the decision. What he didn’t say was that his dad did the same thing to ESPN over 20 years ago.

When Phil Simms retired from the New York Giants after the 1993 season, he landed a job as an analyst at ESPN. He didn’t have a contract with ESPN beyond 1994, but his agent told the company he planned to be back with them unless he returned to the NFL.

Shortly thereafter, ESPN discovered Simms had taken a job at NBC as its No. 1 color commentator for AFC games despite not having any experience.

Simms left for CBS when they received the AFC package, and he has been with the company ever since –until now, when he was replaced by another retired QB without any broadcasting experience.

Sure, CBS could have handled the situation better. But Simms could have done the same thing to ESPN almost 25 years ago. For karmic purposes, it’s hard to empathize with Simms on this one.