While the Seahawks linked arms, Arian Foster and the Dolphins knelt during the national anthem 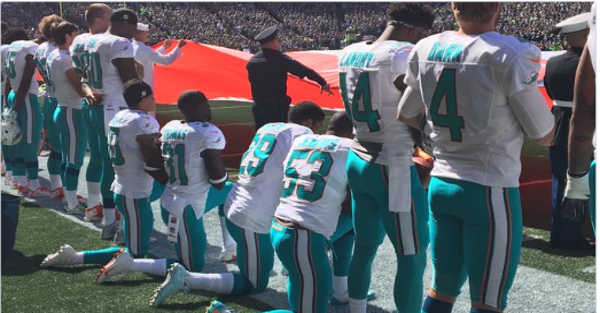 Before the start of the Seahawks-Dolphins game Sunday afternoon, players from both sides unveiled some form of protest, standing in solidarity with 49ers quarterback Colin Kaepernick.

RELATED: While standing during the national anthem, this NFL player supported Colin Kaepernick in an entirely different way

While the entire Seahawks team linked arms, as a way of standing together as one, four Dolphins players, led by running back Arian Foster, knelt during the National Anthem.

Led by Arian Foster a few Fins kneel while the rest stand pic.twitter.com/OgMLGXz62s

Foster has shown support for Kaepernick in the past, saying that he understands what Kaepernick is feeling and why he protests.

The Dolphins released a statement shortly after the players took their knee.