With its assumed franchise QB in place, there’s now plenty of drama in one NFL locker room 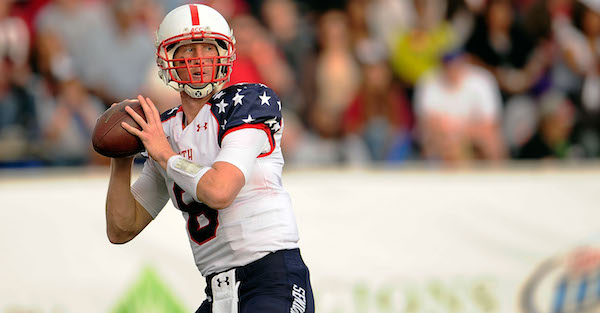 Stacy Revere/Getty Images
during the Senior Bowl at Ladd Peebles Stadium on January 26, 2013 in Mobile, Alabama.

The most surprising pick of the draft happened only moments after the draft started. The Chicago Bears traded up one pick from No. 3 to No. 2 to select quarterback Mitchell Trubisky, which was a surprise to everyone except for general manager Ryan Pace.

So here's who knew Mitchell Trubisky was going No. 2 with Bears on clock:

The most surprised person about the selection of Trubisky was quarterback Mike Glennon, whom the Bears gave a 3-year, $43 million deal in the offseason.

According to the Chicago Tribune, Glennon was at Soldier Field at a Bears draft party when the announcement was made, and he “felt as though he had been cheated on.”

Glennon is guaranteed $18.5 million from the Bears, but there is now a disconnect between him and the franchise.

Pace told Glennon he is still the starting QB, but Glennon is uneasy because he knows management will want Trubisky to be the starter sooner rather than later.

Glennon, 27, was the backup to Jameis Winston in Tampa over the last two years, and he signed the deal with the Bears expecting to be the starter. Pace said he liked Glennon’s inner confidence, and he thinks he will handle the situation well.

Head coach John Fox also indicated that Glennon is the starter as of now, but it’s obvious Pace wants Trubisky to be the guy, or else he wouldn’t have traded several picks to move up one spot to get him.

Having $18.5 million guaranteed is a nice consolation prize, but Glennon will definitely have some trust issues with the Bears’ organization moving forward.