A brutal blindside hit leads to an all-out hockey brawl 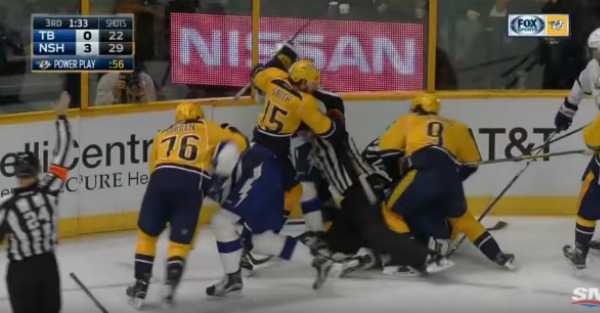 About midway through the third frame, Ellis laid the wood on an unaware Brown as he scrambled for a loose puck, and Brown immediately reacted with a flurry of haymakers. Ellis received a five-minute major and Brown in turn got a 10-minute misconduct penalty.

Also involved in the fisticuffs were Predators winger Viktor Arvidsson, who was penalized for his crosscheck on Vladislav Namestnikov, Tampa’s Jason Garrison, who actually avoided getting penalized for his retaliatory hit to Arvidsson’s head with his stick.

Nashville won the game 3-1, and the two teams get to go at it again Jan. 5 in Tampa.