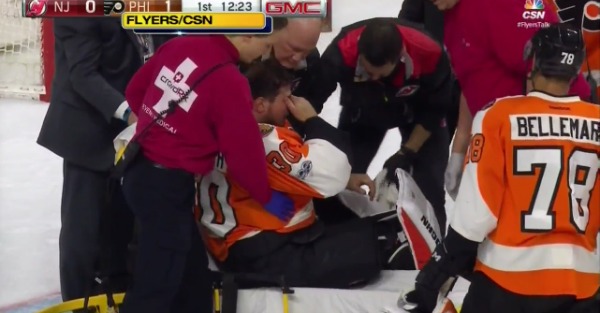 In a frightening moment, Michael Neuvirth, a goalie for the Philadelphia Flyers, collapsed in his own goal during Saturday?s game against the New Jersey Devils, and his teammates and medial personal immediately rushed to his side.

Neuvirth  was awaiting a faceoff on the other end of the ice when he just collapsed.

This is pretty frightening: No one anywhere near him and Michael Neuvirth collapses. Stretched off the ice-conscious pic.twitter.com/sUsfHE8SVe

As soon as his teammates saw what happened, they immediately rushed to his side.

Here's the view of the #Flyers bench immediately after Michal Neuvirth collapses. pic.twitter.com/EyGVv4w2S3

He was awake as medical personnel took him off the ice.

Afterwards, Flyers general manager Ron Hextall said Neuvirth had been suffering from a chest cold, and he was taken to a local hospital for observation.