Nemeth gets puck stuck in visor, is remarkably unhurt 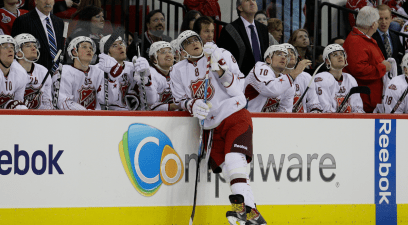 With all the pressure and drama of a playoff push mounting, taking a break with the lighter side of hockey is nice from time to time.  It is with this in mind that we give you the Dallas Stars’ Patrik Nemeth, hockey pirate.

For all the money in the world Calgary Flames forward Jiri Hudler probably couldn’t do that again.  Hudler is just trying to dump the puck in the zone and then bam, it’s stuck in Nemeth’s visor over his eye and somehow Nemeth wasn’t hurt at all.  It’s not just wierd that the puck gets stuck under the visor, but Nemeth seriously isn’t hurt at all.  Crazy.

So here is something pretty funny to laugh at for five minutes.  When you’re done you may recommence anxiously worrying about your teams playoff future.