This NHL coach is tough as nails, takes a puck to the head, opens a nasty gash, and acts like it’s nothing 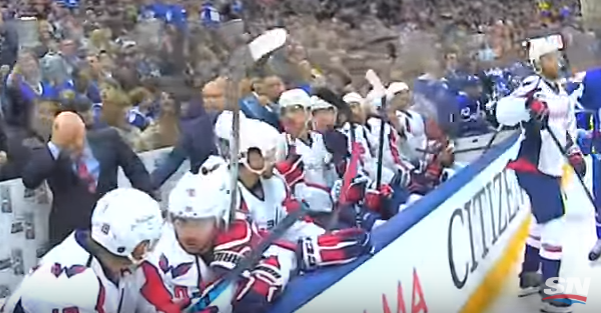 Barry Trotz just passed the audition in the “Toughest Coach in the NHL” competition.

The coach of the Washington Capitals took a puck off his bald head, and it opened up a nasty gash. You can tell, from this picture, he’s not happy:

The incident happened during the Capitals – Toronto Maple Leafs game. A puck deflected off the skate of the Washington defenseman Karl Alzner, and ricocheted toward the Caps’ bench — and Trotz’s head.

RELATED: Matt Calvert takes a stick to the face and needs 36 stitches to close the wound

So Trotz — tough guy that he is — shrugged it off , stayed behind the bench and gave a classic response:

Asked Trotz if he was OK after the puck hit him in the head. "What puck?"

If the puck didn’t cause a headache, his team’s performance sure did. Washington lost, 4-2.