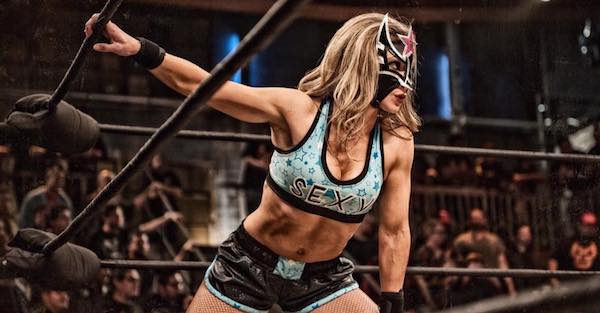 According to PWInsider, Rosemary suffered an injury during the finish of the match after Sexy Star hyperextended or dislocated her elbow using her armbar submission.

Rosemary finally shared all on the armbar spot, and she held nothing back.

“Let me make this perfectly clear: if you take liberties with someone’s body when they are giving tit to you and trusting you to keep them safe, you are not tough. You are an asshole. And you don’t belong in the business.

Sexy Star decided to do just that this weekend at Triplemania. And while I have remained quiet on social media until I was more calm to address the situation, I have now been informed that she is telling people that it is a work. You are all now being informed that Sexy Star is a liar. She was a liar in the locker room when she was forced to apologize and instead cooked up some bullshit excuse that she “didn’t know” and she is a liar now. You know if you are torquing on someone’s arm. You know an armbar is a real and dangerous hold.

The only reason your face is not broken right now is because a little voice inside my head as I lay on the apron kept repeating, “Don’t go to Mexican prison.” (thanks, Demon)

However, turning to positives: the outreach from the wrestling community has been incredible. I’m overwhelmed with how much love I feel right now from friends, fans, and people I have yet to meet in this amazing business. We are a family and we protect our own. If you violate that, you are not welcome here.

I also what to thank the AAA locker room. Multiple people came up to me saying how sorry and disgusted they were. Thank you Hamada and Shani, who also had to deal with bullshit from Star during that match. Thank you, Vampiro, for professionally trying to calm a volatile situation, though, as you know, once the excuses started pouring out of Sexy Star’s mouth in lieu of an apology, it was over.

Thank you to the amazing GFW locker room, both present that night and not. I have so much support from everyone, and talent, crew and office have all reached out to show me that.”

Prior to the incident, Sexy Star and Lady Shani, who was also competing in the 4Way match, “were legitimately shooting on (fighting) each other at one point.” According to the report, Sexy Star apologized to Rosemary and was rushed out of the arena as tensions were high backstage.

Doctors evaluated the GFW Knockout to determine the extent of the damage. Fortunately, PWInsider reported that Rosemary’s injury isn’t quite as severe as it had been originally reported through numerous outlets and she is not expected to miss extended time.

Still, Sexy Star’s actions were rightfully shunned by a wrestling community that follows the code of taking care of your opponent and trying to avoid injuries at all costs. Here are some notable reactions to the incident, including several of Rosemary’s fellow GFW Knockouts.

Just watched the clip from #TriplaManiaXXV and I am even more angry than I was last night.

If you deliberately hurt or "shoot" on someone in the ring, someone that is TRUSTING you with their body, you don't belong in our business.

If that "wasn't" a shoot, she's just another idiot mark who doesn't know the mechanics of an armbar. But I'll beat her ass either way. https://t.co/qTJhQtwcXI

Sexy Star will never set foot in one of my locker rooms. I hope others follow suit.

Whether it's dick flips or submissions, we constantly put our health in each others hands. If you violate that trust, you're not one of us.

Unprofessionalism at it's finest, legit so pissed about this. https://t.co/6FO9Ps6gpL

Obviously intentionally hurting someone who is putting full trust in you to NOT hurt them is stupid. Karma gets everyone eventually.

I couldn't agree more. There is a thing called professionalism. Check the rest at the door. Not any one of us is better than anyone. https://t.co/nECln4ex3n

For the record, @WeAreRosemary is one of my favorite people in wrestling. Heal up homie 🙏🏻

Mike, did that girl really hurt @WeAreRosemary ? Just wondering so I can insure she never works any where near me! #OUDK #POWEROFLOVE

Bring your shitty work and that pussy boxer husband to my ring SexyStar. Me & my new wife to be @impactlvn will shoot on you for a shoot https://t.co/CCTbO8theN

It's disappointing to see a "professional" be so careless and wreckless with a fellow worker… All I can say is: KARMA. https://t.co/j892olqUJh

DISGUSTING is just one word. We put our lives in each other's hands. So unprofessional. This is how you work yourself out of the business https://t.co/aELhRMO017

Some people are such huge marks for themselves that they'll never understand the art of the "work." Those people should never be in a ring.

This is effing disturbing. Not ok on any level. https://t.co/o1wCXtrcuY

So you watched Sexy Star at #TriplemaniaXXV last night too? https://t.co/98IULBtKw9

So disgusted by Sexy Star. She used to just be a joke in prowrestling, but she's upgraded herself to a plague. Get out of our ring. #bye

Rosemary may be the most universally loved person on the roster…the whole feed is HEATED.

Surely, there will be repercussions for Sexy Star following the incident.