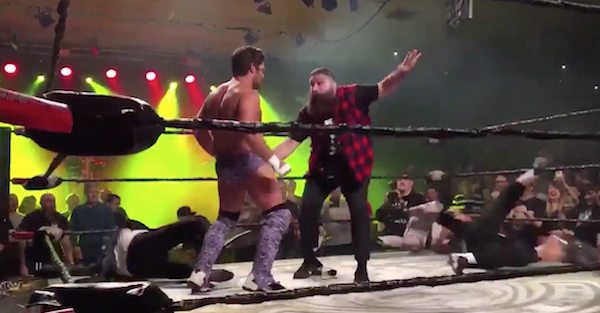 Back in March, Mick Foley was “fired” as Raw general manager after he underwent hip surgery.The hardcore legend is apparently already taking bumps again, but not what we’re necessarily used to seeing him do.

Foley was the latest to take the “penis slam” from indie favorite Joey Ryan:

Foley later discussed the incident on his Facebook page:

Ryan later took to Twitter and discussed a potential partnership with Foley in the future, using an interesting take on the “Rock and Sock Connection.”

After more than a month of fighting for health insurance, Foley shared a good news-bad news sort of situation back in February on Facebook post:

I am cleared for hip surgery! It took a couple months, but I was able to get my health insurance back, and I?ll be getting my right hip replaced whenever I have a break in my schedule. The bad news is that a hip replacement will not allow me to fly for about six weeks, due to potential blood clotting issues ? which can be fatal. Really nothing to play around with. The good news is that the GM position doesn?t offer much in the way of long-term job security ? so that break might present itself as a natural course of events.

Foley has lost a ton of weight over the last year or so (thanks to DDP Yoga), helping ease his day-to-day living situation and lack of movement. But the incredible amount of pain has forced the former champ to look into hip surgery, and it seems his situation was quite dire.

ABOUT THAT HIP OPERATION

I guess I should?ve said something when I started getting prayers and well wishes from friends and colleagues alike ? including some of the biggest names in the business. I have definitely mentioned that I needed a hip replacement, definitely mentioned that I intended to get one sometime early in 2017, but never actually set a date. I have this little tiny problem in that I don?t actually have health insurance.

I had health insurance for 26 years, but the last four years have been tough ? with companies sending out letters telling me they will no longer be insuring families, and that I needed to find alternate insurance. By 2016 health insurance was particularly confusing, and after missing one payment, I found myself no longer insured. I am doing my best to be insured in 2017, but nothing is guaranteed, and I have no idea how this new insurance company will feel about replacing a hip that clearly should?ve been replaced many years ago.

For those wondering why the general manager of Raw needs to procure his own health insurance: well, I?m on a handshake deal. I do the job as long as I enjoy it and feel like I am making a difference, and I do it as long as WWE is happy with me and thinks I?m the best person for the role. No contract involved at all, except for the legends deal, which is strictly about merchandise. For those wondering why I just don?t pay out-of-pocket, well it?s a $60,000 operation, and I am going to look at some other options before I shell out 60K for an operation. Maybe I will concentrate on landing a couple of TV or film roles and get the far superior AFTRA insurance to take care of the operation. I probably should not be talking about it at all ? but the word is out there, and I feel like I owe people an explanation.

Luckily, I am used to the constant pain ? and it?s not like I wasn?t warned by almost every guy in the wrestling business that the moves I was doing as a younger man were going to come back to haunt me. Well, they?re haunting me! The weight-loss has helped considerably; without it, and the DDP yoga, I don?t believe I could even get through airports. But the constant travel means constant pain. I love being the Raw GM, and I will miss it when it?s gone. But my quality of life will probably improve when Stephanie and WWE decide to go in a new direction.

Thank you for your prayers and concern. I am coming off an amazing December, during which I created some memories that I know I will hold onto for a lifetime. I know a lot of people don?t get my whole Santa thing. I can only tell you that when that red suit goes on, the very best part of me comes out, and I do some things I am very proud of each December. I had wanted most of December off, but I had made a commitment to the Pittsburgh Children?s Hospital, and it meant a lot to me to fulfill that commitment. Then Mr. McMahon said something to me about a shark cage in question with Chris Jericho suspended above it, and I knew I had to be at that Raw. I missed Monday?s raw. I should be back for almost every episode until that moment comes when/if the company decides to go in a different direction. If they do, I will simply be grateful for every single day I had a chance to go out and try to make a difference. Some nights I was more successful than others. But deep down I think the superstars in the back know I was doing my best to look out for them ? and they know that has not always the case when it comes to the people who fill these roles.

With or without a new hip I?m going to lead a good life. The medical sciences out there to help me lead a life with far less pain. I hope that I am given the opportunity to take advantage of the new technology. Maybe some enterprising orthopedic specialist can think outside the box and look at me as a potential poster-boy for their services. If The Rock can sell tires, then I have to believe I can sell hip replacements.

Have a nice day.

It?s wild to imagine that Foley is appearing pretty much weekly as an integral part of the show on a handshake deal, but that may just be how WWE works with legends. Luckily he?s getting his body taken care of and figuring things out with payment.

Thanks for the memories

It?s also a nice time to thank the Hardcore Legend for putting his body on the line over and again.

We’ll see if Foley ever returns in a significant role to WWE again now that his hip has apparently been fixed.