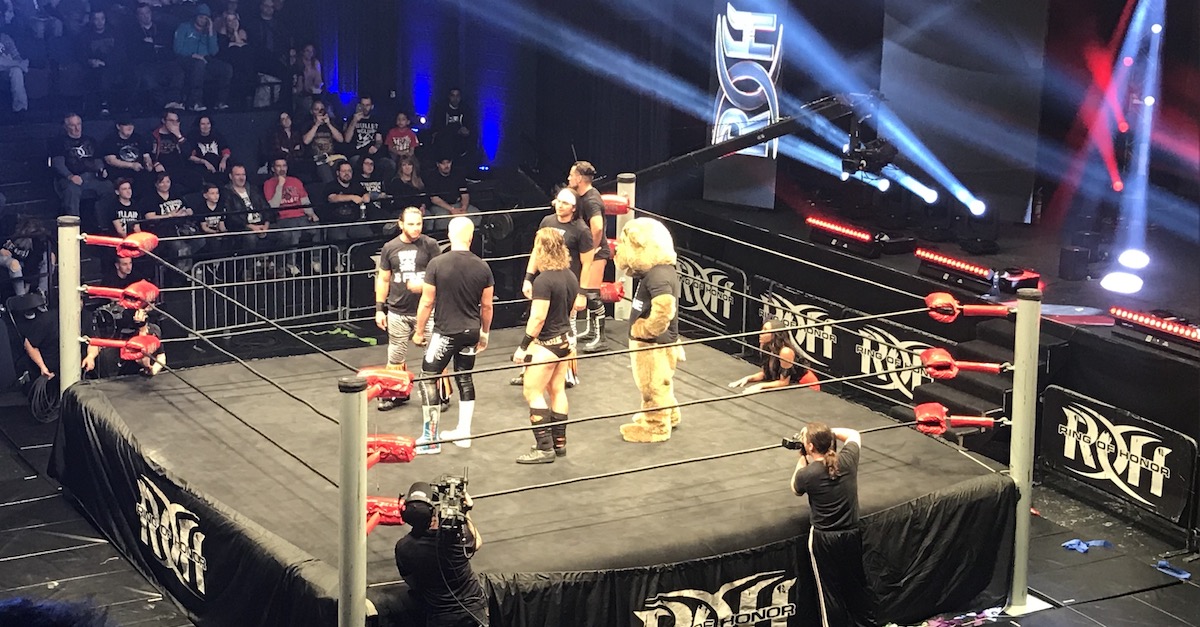 As part of the build to Cody Rhodes versus Kenny Omega at Supercard of Honor in New Orleans on Saturday, April 7, the Bullet Club teased a split during the Ring of Honor tapings in Atlanta on Saturday, February 10.

Early in the night, after the Young Bucks’ win over SoCal Uncensored’s Frankie Kazarian and Scorpio Sky, Christopher Daniels hit the ring and attacked them. Despite Cody sitting ringside on commentary, he did nothing as the attack went down, leading to Hangman Page making the save. The Bucks were visibly irked at Cody, but all seemed fine leading into the main event of the final taping.

Cody, Marty Scurll, Page and the Young Bucks teamed in a 10-man tag of the main event slated to broadcast in late March. Before the match got underway, Cody brought out “Bullet Club is fine” t-shirts for the entire group. They all begrudgingly put on the shirts, and there were specific spots of dissension throughout the match.

The Bucks pointed to the side of Cody’s tights, which read “LEADER” and while setting up for a superkick party, Cody made a blind tag to put himself in the match.

The Bullet Club got the win, but after the match, in a post-win promo, the Bucks said there is only one real leader — Kenny Omega. They tossed their shirts and went to the back, as Scurll followed suit. That left Cody, Brandi, the Being the Elite mascot and Page as the lone members remaining in the ring.

It appeared that’s when the cameras stopped rolling for the ROH taping and the Bucks/Scurll came back out to celebrate in Cody’s hometown, Atlanta.

We’ll see in the coming weeks.