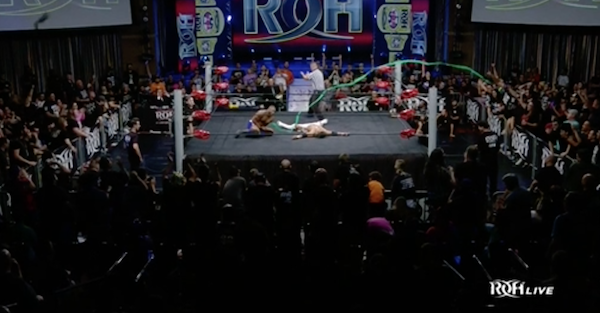 With his daughter in the crowd live at Ring of Honor’s Death Before Dishonor, Kenny King defeated Kushida with the Royal Flush to win the World Television title.

On the outside, Kushida attacked King with a diving attack off a chair, then hit a dive from the top rope to take the challenger out.

Kushida locked in a Kimura, but King lifted him with pure strength and worked his way out with a suplex.

The opponents went at each other in the ring, with Kushida and King trading elbows to the face from a kneeling position. Kushida ran off the ropes, then attempted a Hurricarana, but  King held him, brought him to his shoulders and connected with the Royal Flush for the win.

This is King’s first single’s title in Ring of Honor.