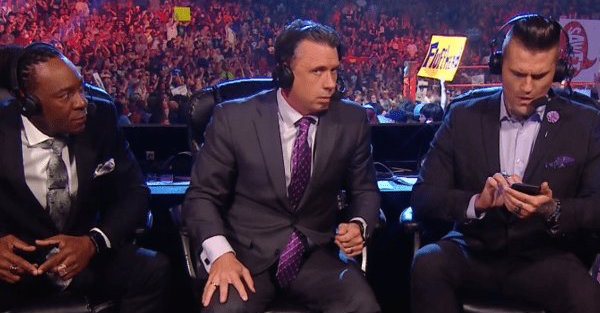 According to WON‘s Dave Meltzer (per subscription), Booker T’s demotion from the RAW broadcast team was based on the company bring former ESPN host Jonathan Coachman back into the fold and had less to do with Graves’ politicking.

Additionally, the Hall of Famer said he planned on addressing the feud with Graves during his radio show on Saturday and invited Graves to “call in and clear the air,” which makes the spat seem more like it was scripted, rather than real-life heat between the two.

I’m going to address all of the news from this past week on my show tomorrow. There’s been a lot of things said and I’d like to publicly invite @WWEGraves to call in and clear the air.

Last week, Booker T called out Graves on his Heated Conversations radio show, claiming the former NXT superstar was “the reason” he was taken off the RAW broadcast team because the company “feared” he would “take him to the woodshed.”

He also states if he catches Corey ‘outside of WWE’ he will fight him.

“If I got Corey Graves into a fisticuffs, I would beat him down like he stole something,” Booker T said. “I would be whoopin? his ass all day long.?

He added that he would be willing to cause a physical confrontation if he saw him outside the confines of WWE.

?If I catch Corey Graves on the street, I?m gonna do something to him,” Booker T said. “I ain?t gonna do it at the office or the airport.?

Graves responded during this week’s episode of RAW, warning Coachman that he “better be careful” or he would “be doing local radio too,” as an obvious jab to the former World champion.

While everything reported seems to be speculation, it’s likely that both parties would have been reprimanded by WWE for taking public shots at co-workers, specifically Booker T, who physically threatened his colleage.

Despite his demotion, the six-time World champion is still employed by the company and would likely face some kind of punishment, especially given how high WWE seems to regard Graves, given his role as color commentator for both RAW and SmackDown Live.

For Graves, it’s been noted how hands-on Vince McMahon is with commentary and bad-mouthing a Hall of Famer for any reason other than kayfabe seems like a punishable offense as well.

It seems that this is, like many expected, is part of an act and will likely culminate with some kind of payoff. We’ll just have to see what that is down the line.