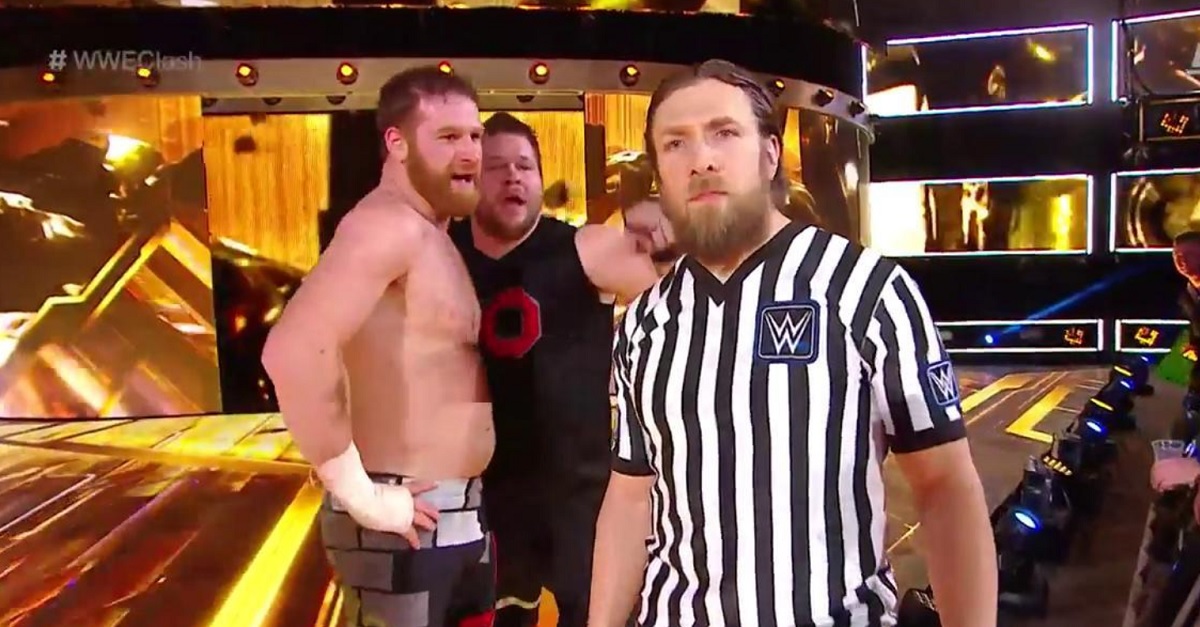 WWE’s Clash of Champions was live from the TD Garden arena in Boston, Massachusetts on December 17, 2017.

After some teasing over the past few weeks, the Singh Brothers were indeed ringside with Mahal for this matchup.

This one went outside early, with a couple of brutal spots where Mahal threw Styles into the unexposed barricade, and then onto one of the announcers tables.

Mahal continued to beat up on Styles, until the champion finally reversed fortunes with a big dropkick as Mahal tried to come off the middle rope. Mahal quickly turned Styles’ offense around by hanging Styles up on the ropes by the ribs as he went for a Phenomenal Forearm.

Styles and Mahal went back and forth for about 10 minutes, with Mahal continuing to target the ribs when he could. Like most Mahal matches, the Singh Brothers eventually tried to get involved, to which Styles was forced to lay both out ringside. This allowed Jinder to catch Styles off guard to hit the Khallas, but Styles was able to kick out.

At the finish, Mahal tried to go for his own Styles Clash, but Styles eventually reversed it into the Calf Crusher for the submission. Really good match, and hopefully the end of this feud as Styles will likely have a new opponent after back-to-back wins over Mahal.

This was weiiirddddd to start with, although it was presented to be that way. With Shane and Bryan both acting as referees, it led to many awkward moments early on where the two were both counting pinfalls completely out of sync with each other.

Eventually the two agreed to split the ring in half, and the match started to progress… though it went slowly at first with a bunch of headlocks.

The match finally reached its crescendo when Orton hit Zayn with the RKO. As Shane counted the pin, Owens pushed Bryan into Shane to break the count and eventually cause dissension between the two referees. That got amped up as Shane then refused to count 3 on a Sami Zayn pin attempt, and Bryan made up for it by completely fast counting the next pin to give Sami and Kevin the victory.

Really fun match, even if it was a bit awkward at times with four guys legal at all times.

A couple of things out of this match: One, Rusev was incredible popular with the crowd, which would have absolutely exploded if he had been able to get a win for him and Aiden English.

My God Rusev is over pic.twitter.com/jtGrLv8l6V

The second thing: Chad Gable is incredible, even if he almost murdered Aiden English with a German suplex. To close the match, Gable suplexed Rusev, English, and Big E in succession before he ran into the Usos. The brothers were able to stop Gable’s suplex train, and won the match after a superkick and a splash off the top rope.

Unfortunately, the win meant for a very sad Rusev Day. Maybe next time…

In the opening match for the WWE Clash of Champions show, Dolph Ziggler triggered the first title change of the night as he defeated Baron Corbin (c) and Bobby Roode to win the United States Championship.

Ziggler got the win after an exciting match that saw all three competitors hit some big spots. Perhaps the biggest was this tower of doom superplex spot that saw Roode and Ziggler both go down hard as Corbin threw the two to the mat from the top rope.

In the end, Ziggler was able to get the win after he reversed a Corbin End of Days attempt into a Zig-Zag. In what seems like a rarity these days in WWE, Ziggler actually pinned the champion in the triple threat to win the title.

Lumberjack matches can often be pretty bad, but this one was alright.

Story of the match quickly became Charlotte getting unfairly beat up by the lumberjacks while Natalya watched on and Naomi tried her best to make it fair. This even included Naomi hitting an incredible springboard cross-body from the top rope all the way to the outside.

As with most lumberjack matches, those outside the match got a little bit too involved, and we even saw a cash-in tease from Ms. Money in the Bank Carmella. Charlotte eventually put an end to the nonsense by hitting a moonsault outside onto all the lumberjacks, and she eventually got submission win after reversing a sharpshooter attempt into the Figure-8.

After the match, Natalya gave a teary-eyed heel promo about how she was going to turn her back on the fans since they had turned their backs on her? Potential retirement from the 35-year old former champion? That remains to be seen.

Best of the rest of WWE Clash of Champions