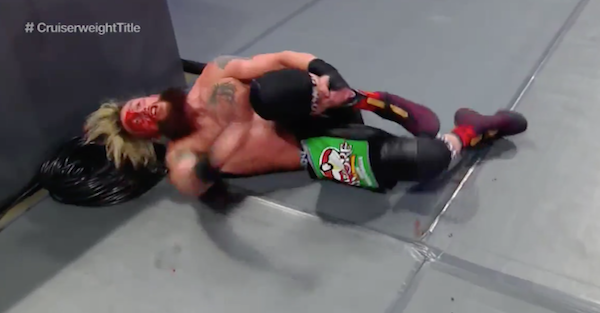 Cedric Alexander won his Cruiserweight championship match by count out, so he didn’t take home the title, but the damage may have been done against Enzo Amore.

Amore was busted wide open by what appeared to be an elbow to the eye:

Then he landed awkwardly trying to catch a diving Alexander.

Alexander started the match off after he knocked Amore on his back and aggressively pushed the champ around the ring. He had advantage on the side of the turnbuckle when Enzo pushed him off onto the outside ahead of a commercial break.

Enzo took control, but a kick to the head busted Amore open the hard way. Alexander connected on a dive to the outside and it looked like Enzo was injured before he was counted out.