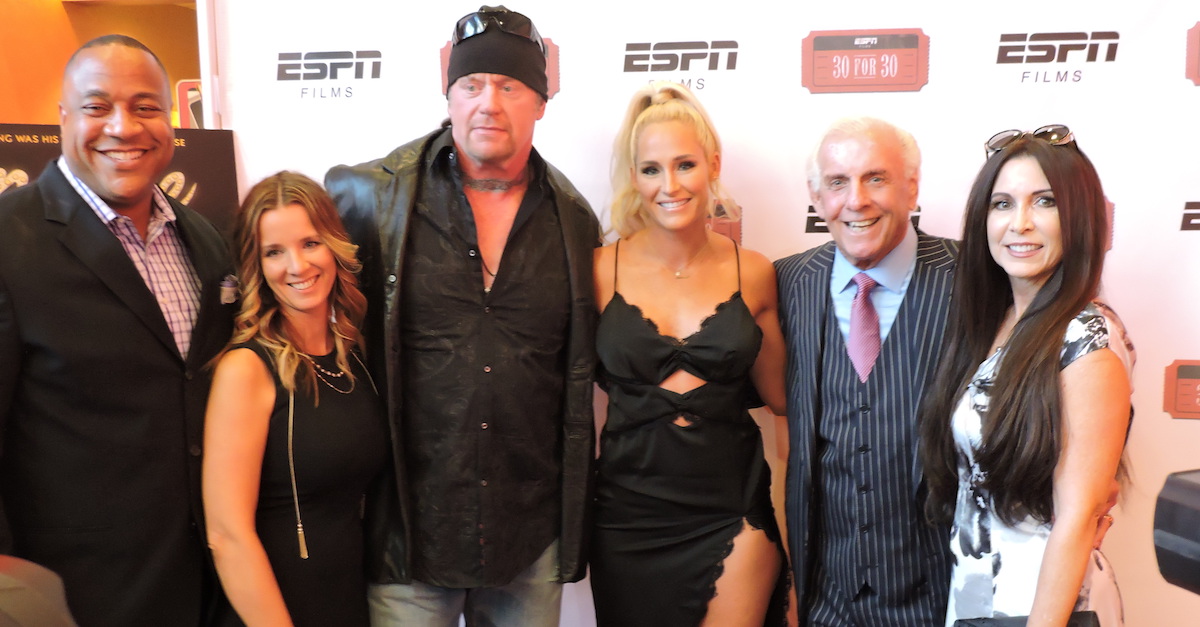 Director Rory Karpf acknowledged the dozens of interviews he put together, recognizing the difficulty of packing the storied career of Ric Flair into 75 or so minutes at ESPN’s 30 for 30 premiere Thursday night in Atlanta.

And while the ESPN 30 for 30 covered Flair as comprehensively as possible, there were some areas the documentary missed on and other situations Flair described in detail after the airing at a Q&A session.

Flair noted in the documentary that he bought a limousine, but didn’t offer many details in the film.

Afterward, Flair noted he’d bought a limo in 1978 from the governor, and paid a kid $25 to drive him around.

“Of course he got amenities at night from the girls,” Flair said with a chuckle.

Ric Flair was struck by lightning, and it killed a man behind him

In the film, Flair discussed the plane crash that turned his career upside down. What they missed was another harrowing incident, how Flair was struck by lightning and how it resulted in a man dying.

“1982, I had just won the world title. I was flying from Miami. They didn’t have jetways then. Landed in a huge torrential downpour. Finally it slowed down enough to just drizzling. I was the second to come off, there was a woman ahead of me. Halfway to the door, all of a sudden, I felt this pulling. It shot sparks 30 feet up in the air. Everyone was screaming. Lightning had hit my umbrella, right up where it had the metal tip and bounced off and hit the guy in the eye behind me and killed him. I froze,” he said.

The film had its fair share of partying stories, but didn’t touch on a few of them, including these epic drinking adventures with the Undertaker.

“1991, flew from New York to Tokyo to wrestle one match. We roared all night long, then got on a plane. Slept three hours and flew to England for another match. Drank all night, then flew back to Chicago. I was sitting in first class, and when I work up, I was laying in coach with my arms across me like Rest in Peace an hour and a half after the plane landed. I missed my connection and the cleanup crew woke me up,” Flair said.

Flair somehow topped that with an even more incredible story.

“(Another one) He and I and Harvey Grant and Curt Hennig started out again. That damn Jack Daniels. Next thing, I woke up in the morning with some alien (a woman) next to me. There were two aliens (two women) actually and I couldn’t find my Rolex. I woke her up and said ‘where’s my Rolex.’ She said, ‘You threw it in a plate of spaghetti at Sabatinos and said you had 11 of ‘em, no big deal.’”

Flair said the next morning was Thanksgiving, he flew to Philadelphia and bought a $47k watch and flew home, where his daughter called him out on it. He was confronted by his then-wife, and Flair said he was down $47k and on his way to his second divorce.

Flair discussed how his jump to WWF happened in 1991, but he and Hulk Hogan glazed over why their WrestleMania match never happened. Both noted they wrestled house shows, and Flair expressed no regret in not matching up against Hogan at ‘Mania since they’d wrestle down the road in WCW.

The match that got Ric Flair’s confidence back

He also talked in the documentary about losing his confidence after WCW closed up shop. He would explain in the Q&A afterward that it was his WrestleMania match with Undertaker that brought his confidence back.

“I just came back at WrestleMania. We talked about it and got off the subject. Hunter came to me and said, 2004, Toronto, my self confidence was at an all-time low. It was a fight to get myself going. They kept putting me in situations where I had to perform, but I was a shell of myself. Hunter said Taker wants to work with you at WrestleMania. I said, I’m not ready for WrestleMania with the Undertaker, mentally. That’s what got me back in the saddle. We had a hell of a match. He got me up and running. He was going to give me the Last Ride, I hated that. I was a little heavy, and he said dammit and gave me the tombstone. I was never so happy to have been tombstones. It was outlawed, but he gave it to me.”