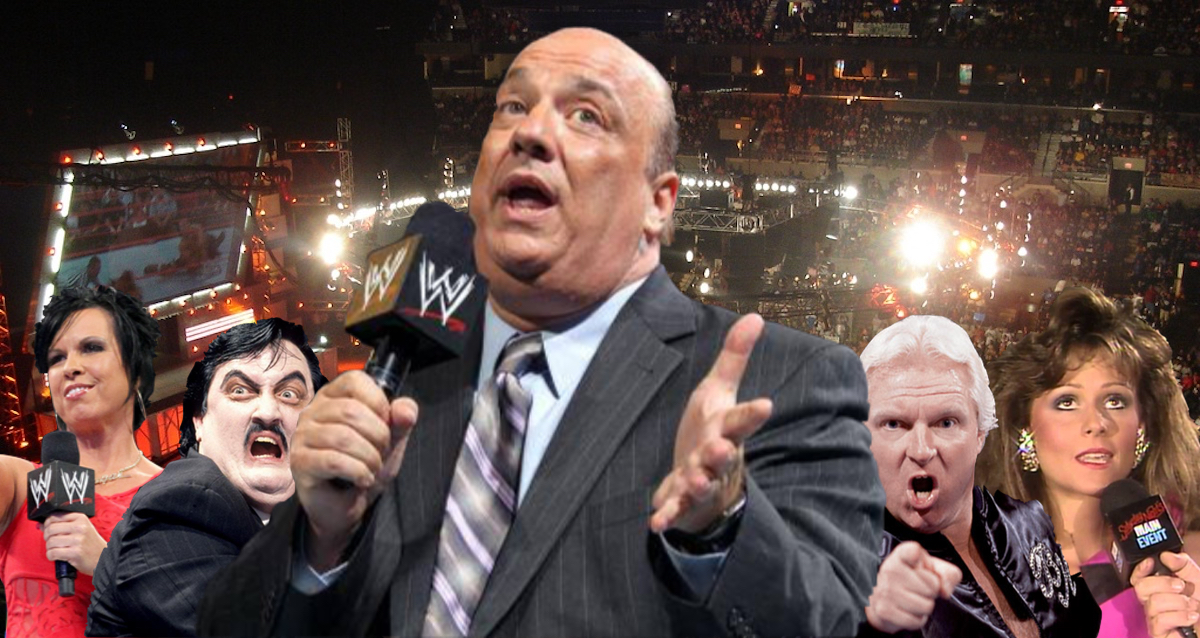 Deciding who is the best at something that is widely subjective is nearly impossible. And yet, here we are. I’d apologize in advance, though it would be insincere.

Paul Heyman, a man who has a career that spans decades, is the greatest pro wrestling manager of all-time.

It is hard to reach this conclusion without bringing up other incredibly talented managers and valets over the years.

Miss Elizabeth might have been a bit of a one-trick pony, but her years and years of storytelling alongside Randy Savage made for some of the best television wrestling has ever produced. Seriously. Try to tell me you didn’t cry when she came in the ring to comfort Savage after he lost his retirement match to The Ultimate Warrior.

Paul Bearer, who has managed far more people than you realize, was as important in building the mythology of The Undertaker as the Deadman himself. Especially in the early years when Taker was far more limited in the ring and his persona demanded he be a person who never spoke.

Let’s not forget Bobby ‘The Brain” Heenan. Managing wrestlers during a peak of wrestling when talent needed someone to be their voice, Heenan worked with the likes of Ric Flair, Rick Rude and Mr. Perfect. Before then, he had also represented Andre The Giant and managed both Nick Bockwinkel and Ray Stevens in the AWA.

We can talk about how underrated Vickie Guerrero actually is, as she elevated the careers of both Edge and Dolph Ziggler. Maybe mention Sensational Sherri, as she helped Savage turn heel and transition HBK from tag team specialist to narcissistic evil-doer.

It goes on and on. We can be here all day recounting some of the wickedly talented managers of yesteryear. Still, one name stands above all others — even if, admittedly, I tried like hell to not allow recency bias sway me into choosing him as the GOAT.

Paul Heyman and the Dangerous Alliance

Even before heading ECW or standing alongside Brock Lesnar during his Next Big Thing run, Heyman would have at least been in this discussion as one of the best of all-time.

Lost in time, he managed the Original Midnight Express in the NWA (in a notable feud against another great manager in Jim Cornette). He also got the first crack at overseeing The Undertaker, although he was just “Mean” Mark Callous at the time.

That isn’t what elevated him as being one of the best. Just using those few examples, Heyman was more in line with being on the level of a Paul Ellering. It was his emergence in 1991 as the leader of the Dangerous Alliance that sincerely began his rise of dominance.

WCW (and the NWA by extension) was always known as heel country. Oddly enough, in the early 1990s, the federation was having a hard time developing new heels. Sure, Ric Flair and the like were always trotting about, when not being courted by the then WWF, but a new breed of bad guys needed to be developed.

Enter Heyman and his stable of tomfoolery technicians.

Meant to be a more modern day version of the Four Horsemen, with Rick Rude pegged as the breakout star, The Dangerous Alliance was a who’s who before most of those guys became true stars.

The Dangerous Alliance was actually born in 1987 (in the AWA), but make no bones about it. It was the 1991 version that gave rise to Paul E. Dangerously.

Rude, Steve Austin, Arn Anderson, and so on, The Dangerous Alliance would dominate the company before Heyman eventually left WCW in a less than awesome fashion. It is worth noting, though, that he certainly helped to elevate each of those talents’ careers, as he led Rude to the United States title and the team of Anderson-Bobby Eaton to tag team gold. Not to mention whatever impact he had on the early development of Austin.

We can mostly skip his ECW version of the Dangerous Alliance, as well as his WWE invasion angle role. While those parts of history are important to the larger landscape of pro wrestling, those portions of time have little to do with how we should view him as a manager. What does is the fact that he introduced the free-world to Brock Lesnar.

Before The Beast Incarnate had a city to suplex or the main event feel he drags around with him today, he was just Brock Lesnar.

By attaching Heyman’s brand to Lesnar at the time, it gave Brock instant credibility. Thanks to some shoots, as well as his ECW creation, Heyman was viewed as the champion of the Internet Wrestling Community. If Vince McMahon backed whoever, that wrestler would automatically be shunned (hello, poor Drew McIntyre). If it was Heyman, fans would just assume greatness awaited.

This is something that began with Brock’s debut.

Don’t forget how important he was to the earliest incarnations of Lesnar, either. Brock, not exactly known as an expert on the mic, needed Heyman to help carry feuds. Aspects of the two’s relationship still playing out on TV in 2018.

There’s also the real-life mentoring Heyman aided Lesnar with. The business side of pro wrestling and all that jazz. The stuff Lesnar often credits Heyman with.

Following several runs at writing behind the scenes, managing OVW, as well as the rebooted WWE version of ECW, Heyman would later reemerge as CM Punk’s mouthpiece. It could be argued that Punk didn’t need Heyman as much as a Lesnar before him, but it again added to yet another wrestler’s allure.

As it has long been, if a pro wrestler is tagged as being a “Heyman guy,” it means he’s not a “Vince McMahon product.” The kayfabe aspect of that can be argued all we want, but Heyman has forever been used as the antithesis of McMahon, elevating the downtrodden wrestlers he represents by extension.

There have obviously been failures. Heyman was never able to quite get Curtis Axel or Cesaro all the way to the next level — though, to be fair to all three people involved, the WWE never seemed that invested in making any of those marriages, or ideas of them for Cesaro’s sake, work.

It happens. When you’re in any business for 30-plus years, not everything will be a rousing success.

Nevertheless, it is a career that dates back to 1986. One that has changed countless wrestling promotions and even more wrestlers, both with his touch and indirectly by way of his legacy.

Heyman has become such an important figure in the history of pro wrestling that, when only playing the role of manager, he no longer has to do much to make things of great importance. One of the greatest microphone workers in the history of the sport, Heyman has reached a level usually reserved only for in-ring talent.

If Heyman is in the ring, you just know whatever is coming next is a big deal, his eloquent tongue doing Hall of Fame-level work or not. Something no other pro wrestling manager can claim.