WWE Hell in a Cell: Shane McMahon jumps off the cage after Kevin Owens fell through a table 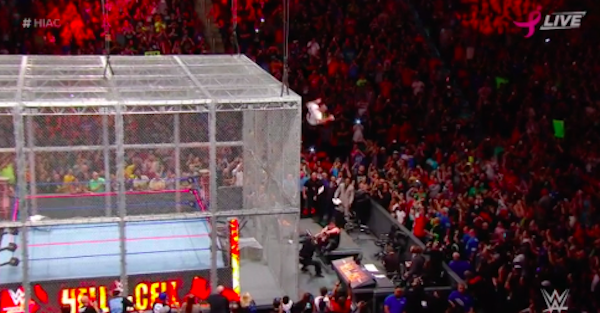 Kevin Owens was able to overcome Shane McMahon’s lunacy Sunday night at Hell in a Cell which involved a slow build to an insane final 15 minutes or so.

First Kevin Owens took a nasty back bump from the side of the Hell in a Cell, then Shane McMahon took another death-defying leap off the side of the cage through the announce table:

"Shane, it's over! Just pin him!" pic.twitter.com/uXWKb347GM

On a replay, it was shown that Sami Zayn helped save Owens before putting his one-time friend on McMahon for the pinball and win.

Owens was helped from ringside and McMahon was put on a backboard and stretchered out.

Owens and McMahon spent most of the match inside the ring, battering each other. McMahon hit a Coast 2 Coast on Owens, but couldn’t put him away. That’s when he got bolt cutters and moved the match outside of the ring.

Back at WrestleMania 33, McMahon leapt off the top of the cell in an absolute war against the Undertaker.

McMahon went on to lose that match after falling through the table.