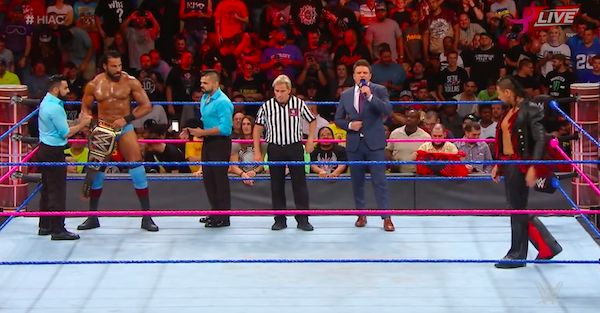 With some outside help from the Singh brothers, Jinder Mahal retained the WWE Championship against Shinsuke Nakamura.

Mahal worked back and slowed down the challenger, grounding him with some stalling submission holds.

Nakamura escaped and got going, hitting some nasty kicks before connecting with his running knees into the corner on Mahal. Nakamura set Mahal up on the apron, and the Singh brothers attempted to attack on the outside. Nakamura took the brothers down, but missed on his knee strike, opening the door for Mahal to regain control.

Nakamura reversed a corner strike from Mahal, and set up for the Kinshasa. The Singh brothers interfered, and referee Charles Robinson ejected them. Nakamura connected on the Kinshasa, but the brothers kept the referee far enough away for Mahal to recover and grab the rope to keep the belt.

Mahal exited the ring, returned and reversed Nakamura’s Kinshasa attempt again, throwing him into the turnbuckle. Mahal caught him and connected on the Khallas to retain.

Mahal won the WWE Championship from Randy Orton back at Backlash in May 2017. He had successfully defended the title four times heading into Sunday night, twice against Orton, once against Baron Corbin and once against Nakamura at SummerSlam.