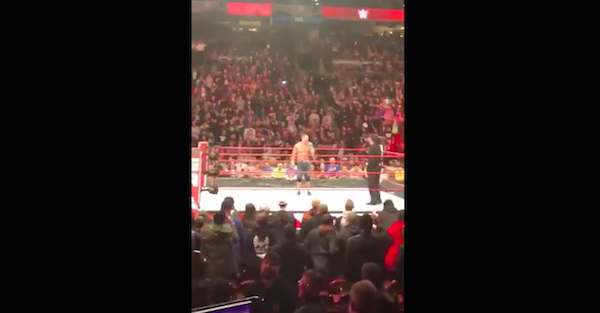 “So as a kid from West Newberry, Mass., I’d like to pay my respects,” Cena said before signing the fight song.

Of course, Cena was referring to the fact that Eagles will face his hometown New England Patriots on Sunday, to which he added, “good luck this weekend,” after thanking the crowd for attending the event.

Cena was also captured saying “I’m a Tom Brady guy” during his entrance in Sunday’s Royal Rumble, which also took place in front of a raucous Philly crowd, who serenaded him with a “John Cena sucks” chant to the melody of his theme song.

The 16-time champion has typically signed-off during live audiences by singing local sports-related songs in the past, including “Rocky Top” in Knoxville and John Denver’s “Country Roads” in West Virginia.

However, given this week’s Super Bowl matchup and his allegiance to the Pats, its more of a surprise to see Cena giving a nod to the Birds.