WWE TLC main event: Kurt Angle returns to the ring with The Shield vs. Kane, Miz, The Bar and Braun Strowman 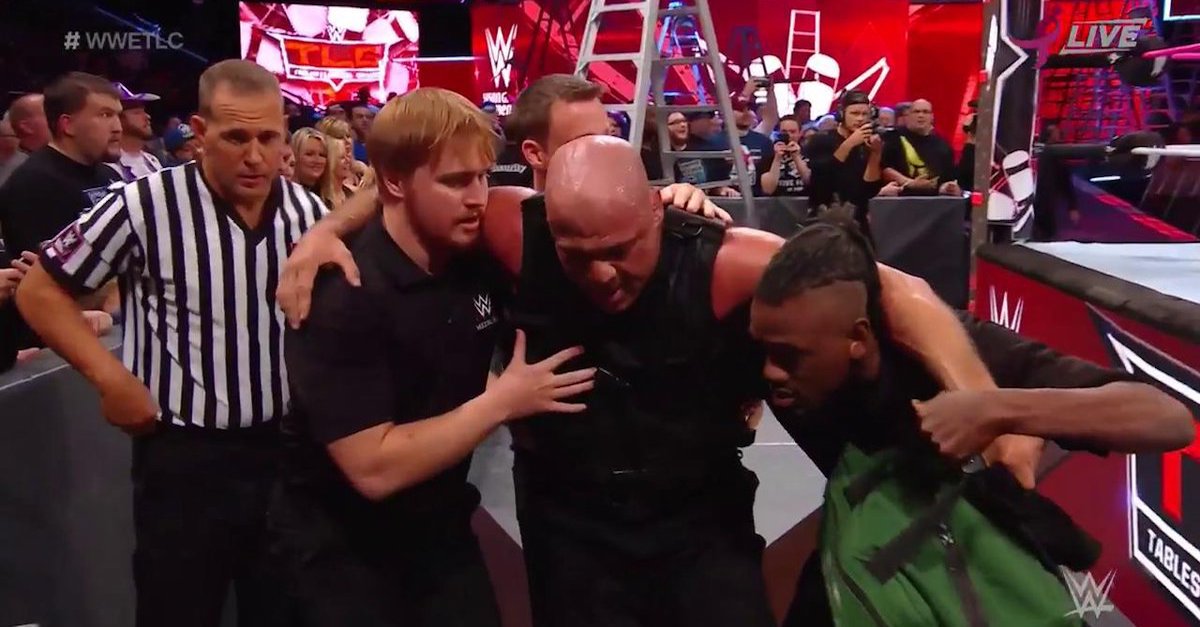 Kurt Angle, Dean Ambrose and Seth Rollins defeated the Miz, Cesaro, Sheamus, Kane and Braun Strowman in the weirdest match of the year.

Rollins, Ambrose and Angle entered the ring with chairs and took it to their five opponents early.

The three men hit the other five with a ladder and took them out by dividing and conquering.

Ambrose and Rollins hit dual dives off the ladder through the announce table, but Rollins appeared to injury his surgically repaired knee.

Rollins and Ambrose through the table! pic.twitter.com/am8BjDI3RI

Miz, Cesaro and Sheamus all attacked Angle with his partners out, but the Shield made the save before Angle could be taken out. Angle went on a german suplex spree before Strowman halted him by slamming him through a table on the outside of the ring.

Officials helped Angle to the back as Strowman, the Bar, Miz and Kane took apart Rollins and Ambrose in the ring.

Things took a turn for the worse in the ring, after Kane accidentally hit Strowman with a chair. Strowman pushed Kane to the ground, but Miz and the Bar were able to get things under control.

Strowman put Ambrose through a table and the four teammates of Miz walked Rollins and Ambrose up the entrance ramp. Miz called to the back for a trash truck, and they threw Ambrose and Rollins into the back of the garbage truck.

Ambrose and Rollins fought out and dove onto Strowman, Kane and the Bar, leaving Miz awestruck on the stage. They chased him down to the ring, where they beat him with a chair.

Walking back up the entrance ramp, Strowman knocked down Ambrose and Rollins. Kane turned on Strowman, chokeslamming him through the stage. He then released a line of hanging chairs onto Strowman.

Strowman emerged from the wreckage as the Bar and Kane took Rollins and Ambrose back to the trash truck. Strowman threw Miz into the LED screen, punched out Cesaro and Sheamus and attacked Kane.

The four men turned on Strowman and beat him down before throwing him into the trash truck.

Miz, the Bar and Kane brought Rollins back to the ring and had a two count before Ambrose broke it up. Kane called for the chokeslam, but Angle’s music hit. He Angle Slammed Sheamus, Angle Slammed Cesaro through a table and hit the ring to fight Kane.

Kane set up Angle for a tombstone, but Ambrose and Rollins hit Kane with a chair. They then tackled Kane through the barricade.

Angle and the Shield hit the triple powerbomb for the win on Miz.

Angle’s return to the ring was possible thanks to Roman Reigns missing the event due to illness.

TLC 2017 was originally slated to be The Shield’s first match back together in more than three years.

Angle made his return to WWE as a member of the 2017 Hall of Fame. He?s a former four-time WWE Champion, two-time World Heavyweight Champion, European Champion, Intercontinental Champion and Hardcore Champion. Angle hasn?t wrestled in WWE since 2006.

It had been more than 10 years since Angle wrestled his last match in WWE.