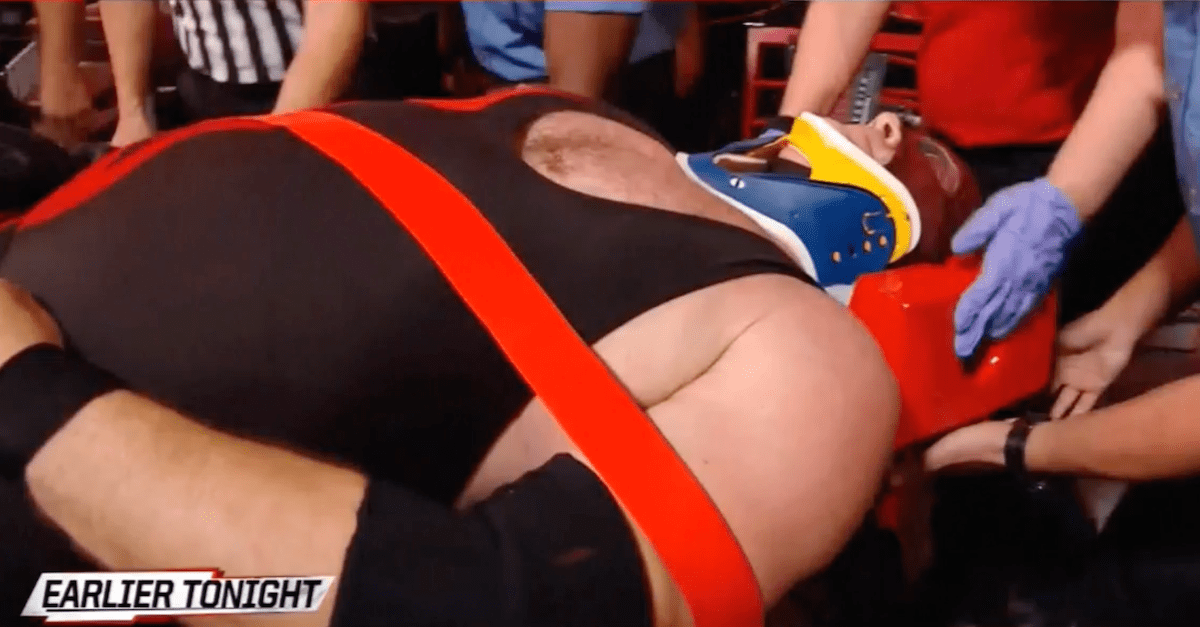 WWE Monday Night Raw broadcast live with its first show after the Royal Rumble on the USA Network at 8 p.m. ET.

Raw opened with a recap of the Women’s Royal Rumble, with Asuka winning and subsequently Ronda Rousey debuting. Stephanie McMahon hit the ring and talked up the women’s rumble before announcing Asuka. McMahon advised Asuka to wait on announcing her WrestleMania opponent because Alexa Bliss will defend the Raw Women’s championship in the first-ever Women’s Elimination Chamber. Sasha Banks confronted Asuka and demanded a match, which McMahon granted for later in the night.

This one lasted only a few minutes, as Strowman beat Kane around ringside, then lifted the entire announce area and dropped it on his opponent.

Hardy was in control, when Bray Wyatt’s music hit and lights went out momentarily. Hardy lost focus, Elias hit him with a big boot, then hit the drift away for the pinfall. After the match, Wyatt showed up on screen and laughed at Hardy.

Reigns beat Miz around the ring, then chased off the Miztourage from ringside with a chair. After he turned his attention to Miz, the champ pulled Reigns into the ring post before the match went to commercial break. Back in the ring, Miz set up for the Skull Crushing Finale only for Roman to break out and hit a samoan drop.

Reigns got his comeback going, set up for the Superman Punch and Miz took out his left knee to halt his attempt. Miz connected with Miz kicks, which Reigns reversed into a powerbomb attempt, but the champ sunset flipped over into a figure four leglock. Reigns reverse and Miz got the rope break.

Miz tried to take the turnbuckle off the rope, the ref caught him and when Reigns tried to attack, Miz hit a thumb to the eye before connecting on the Skull Crushing Finale for the two-count. The Miztourage hit the ring to save Miz, and Reigns took out both men on the outside.

Reigns hit a Superman Punch on Curtis Axel, speared Bo Dallas and Miz rolled up Reigns from behind to retain.

Maybe the most brutal women’s match in recent years, Asuka vs. Sasha Banks was absolutely insane.

Asuka took it to Sasha, kicking her in the head on a dive through the ropes, then landing a nasty knee to Banks’ face. Banks would respond with a diving knee strike against Asuka to take her out momentarily:

Banks locked in the Banks Statement for Asuka to reverse it into the Asuka Lock for the tapout and victory.

The Bar retained in a quality match that saw plenty of blind tags by the Bar. Crews got a good amount of offense in and showed resilience in keeping it close with the champs.

Luke Gallows and Karl Anderson made their entrance first, followed by Finn Balor before the commercial break. Cena made his entrance and the two competitors chain wrestled for the first part of the match, with Balor taking the early advantage.

Balor got going, only for Cena to halt him in his tracks with shoulder blocks followed by the five knuckle shuffle, but he missed.

One eye on #WrestleMania…

Cena set up for the Attitude Adjustment, Balor jumped off and hit the Pele. He then connected on the slingblade and went for the dropkick into the corner, only for Cena to clothesline him.

Cena AA’d Balor while giving the Too Sweet sign for the close two-count!

Balor set up for the Coup De Grace, missed and appeared to injure his knee. Cena put him in the STF, but Balor got the rope. Cena landed the AA from the middle rope for the pinfall.