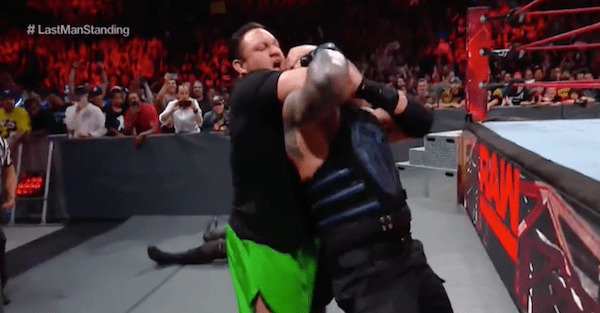 Reigns and Strowman went at each other before the bell even rang. After some back-and-forth action, Reigns used the stairs to beat him to the mat. The ref only counted to five before Strowman was back on his feet. Reigns was caught in midair during his Superman punch attempt, thrown back and Strowman eventually planted the former champ, who didn’t get up to his feet until the eight count.

Strowman attempted to lift Reigns on a counter off the ropes, the latter connected on a Superman punch after being lifted into the air. Both made it back to their feet and Strowman landed a dropkick before running shoulder first into the post.

On the outside, Reigns pulled a table out from under the ring and slid it into the ring. Reigns eventually put Strowman through the table in the ring, but it wasn’t enough to keep him down.

Back on the outside, Strowman through a rolling chair into the face of Reigns, who took until the count of nine to get up.

Reigns and Strowman battled up the entrance ramp and made their way back to the ring. Reigns hit the spear and had Strowman down at the count of eight before Samoa Joe appeared and locked in the Coquina Clutch to put Reigns to sleep. Strowman stood at the count of nine and Reigns wasn’t able to get up, losing the match thanks to Joe.

The rest of the show

The Miz and his Miztourage opened Monday Night Raw only to be interrupted by Kurt Angle. The red-brand general manager unveiled his special guest as Brock Lesnar, who dismantled Miz, Bo Dallas and Curtis Axel in a dominant display of strength

Rollins had the momentum when he approached the top rope only for Cesaro to distract him. Rollins jumped and tried to attack him before Sheamus got the rollup for the win.

Rollins attacked the tag team on the outside after the loss, before the numbers game caught up with him. Cesaro and Sheamus continued looking back to the back, hinting at a Dean Ambrose run-in. That never happened and Rollins was left laid out in the ring.

After the match, Rollins confronted Ambrose in the back and essentially told him he needed to get over what happened three years ago when he broke up the Shield.

Jordan made quick work of the enhancement talent after Curtis Axel was unable to perform due to his beatdown at the hands of Brock Lesnar earlier in the night.

Banks set up the Banks Statement on Fox, Emma attempted the roll up out of the submission attempt and Banks reversed that into the Banks Statement for the win. Banks will take on Nia Jax next week for the No. 1 contender spot to Alexa Bliss’s Raw women’s title.

Big Cass came out to distract Big Show only for Gallows to boot the 7-footer onto the outside of the ring. That allows Gallows and Anderson to take down Amore for the easy win.

Cass attacked Show on the outside after the match before Amore made the save. After beating down Amore a bit around the ring, Show came to and hit the knockout punch to put Cass to sleep.

It was a world championship-quality match that saw Ambrose win in almost the same fashion Rollins lost earlier in the night. Ambrose went to attack Cesaro from the top rope as Sheamus distracted him. Cesaro went for the roll-up, only for Ambrose to reverse into the roll-up for the win.

After the match, Sheamus and Cesaro attacked Ambrose in the ring before Rollins made the save. Ambrose extended his fist in a Shield-like reunion for Rollins to deny him this time.

Davari worked Tozawa’s shoulder, but a german suplex set up the senton for the win.

Jax dominated the James and Brooke throughout the short squash match to set up her No. 1 contender’s match against Sasha Banks next week. The winner will face Alexa Bliss at SummerSlam for the Raw Women’s title.