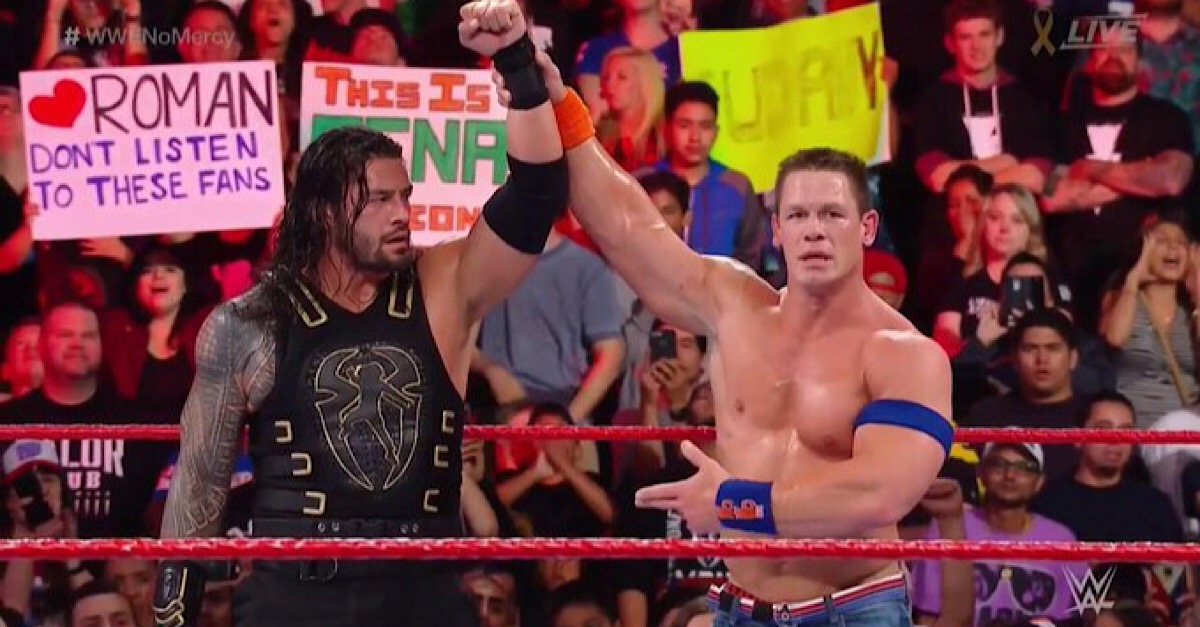 In a match that could have main evented WrestleMania, Roman Reigns defeated John Cena by pinfall at WWE No Mercy in Los Angeles, California.

Fans chanted that both guys suck, and Cena left the ring to head back up the ramp to start the match.

Reigns attacked him from behind and threw him into the ring. Reigns controlled the match early, throwing Cena into the stairs and hitting the Driveby on the outside.

Back in the ring, Cena hit the body drop and set up for the 5 Knuckle Shuffle, but Reigns reversed into the samoan drop. Reigns locked up for the Superman Punch, but was reversed into the STF. Reigns escaped and hit a lifting powerbomb. Cena caught a diving Reigns and flipped him into the Attitude Adjusment for the two-count.

Cena attempted a diving leg drop, and Reigns reversed into a powerbomb for the two-count. Reigns connected on the Superman Punch, and followed it up with attempting the spear, but Cena evaded and he hit the corner. Cena lifted Reigns onto the top rope and connected on the diving AA off the rope, only for Reigns to kick out at two.

Cena winked at the camera and tore apart the Spanish and German announcer?s table. Cena put Reigns in position to hit the AA onto another table, but Reigns reversed and speared Cena through the table.

Back in the ring, Reigns tried for the spear, but Cena reversed into the AA, rolled into another AA and stil only got the two-count. Reigns made his way to his feet, hit the Superman punch, then finished Cena with the spear for the win.

After the match, Cena lifted Reigns? hand and they showed off to the crowd. Cena and Reigns hugged it out after the match.