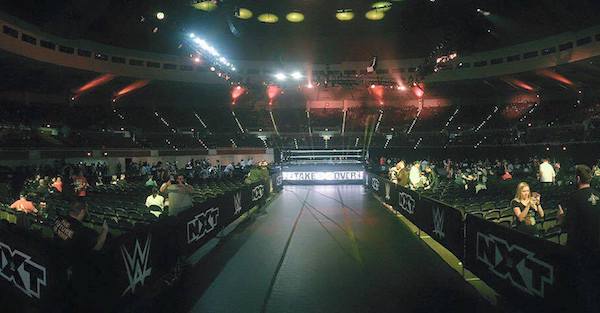 NXT set for its second consecutive night of tapings in Atlanta on February 2, 2018.

Andrade Cien Almas and Zelina Vega cut a promo on kicking Johnny Gargano out of NXT. As they were leaving, Aleister Black came out with a mic in his hand, only to be attacked by Killian Dane, who laid out Black.

NXT really let Ricochet show his stuff here. A mix of athleticism and strength, Ricochet flew around the ring and landed a northern lights into a suplex to set up the finish.

AOP landed an absolutely bonkers powerbomb from inside the ring, out onto the apron before hitting the Last Chapter for the pinfall victory.

Tommaso Ciampa walked out on stage with his crutch to no music. He slowly strolled to the steps and climbed into the ring. Ciampa grabbed the mic and was hit with a chorus of boos. He threw the mic down, got out of the ring and ripped some kid?s Johnny Gargano sign. He then smashed it with the crutch and left.

Dane started off hot with a running dropkick, pushing Black into the turnbuckle for a two count. Black came right back, knocking him to the outside before hitting a moonsault to the outside. Dane earned the advantage back inside the ring, but Black just wouldn?t go away. He landed Black Mass for the pinfall.

Montez Ford hit a frog splash from 3/4 across the ring on Otis for the pinfall. Super entertaining match.

NXT handed out Johnny Gargano signs before Tommaso Ciampa came out yet again. He grabbed a mic and looked furiously around the crowd. He dropped the mic again and left without saying a word.

Kai won with a quick rollup and Baszler hit the ring. Before she could attack Kai, Ember Moon made the save.

Moon said their rivalry will be over at TakeOver New Orleans and attacked Baszler.

As refs pulled her off, Baszler clocked Moon. Moon went for the Eclipse, but Baszler knocked her down and went for a standing Kimura, but Kai made the save. Moon then landed the Eclipse.

Young and Wolfe landed a backbody drop/neckbreaker combo for the pinfall. Nikki Cross is super over.

Dunne went right to the outside to confront Fish and O?Reilly, then hopped back in an threw a devastating elbow at Cole. On the outside, Dunne landed the toss suplex onto the apron.

Back in the ring, Cole took advantage momentarily, but Dunne was back on him, damaging Cole?s left arm. Cole attempted a suplex, but Dunne reversed into a Kimura with Cole still standing. Cole escaped and hit a scissor kick to Dunne before trash talking him. Dunne got up and landed a NASTY elbow that sent Cole flying.

Fantastic sequence between Cole and Dunne led to Dunne attempting the step up backflip off the turnbuckle and Cole super kicked him.

Aleister Black has been named No. 1 contender for Andrade Cien Almas? NXT Championship

William Regal is out to sign the contract between Black and Almas.

Almas didn?t come out, but Vega did and said the champ will destroy Black at TakeOver New Orleans. Black said he didn?t come out alone, and Candice LeRae hit the ring, attacking Vega around ringside.