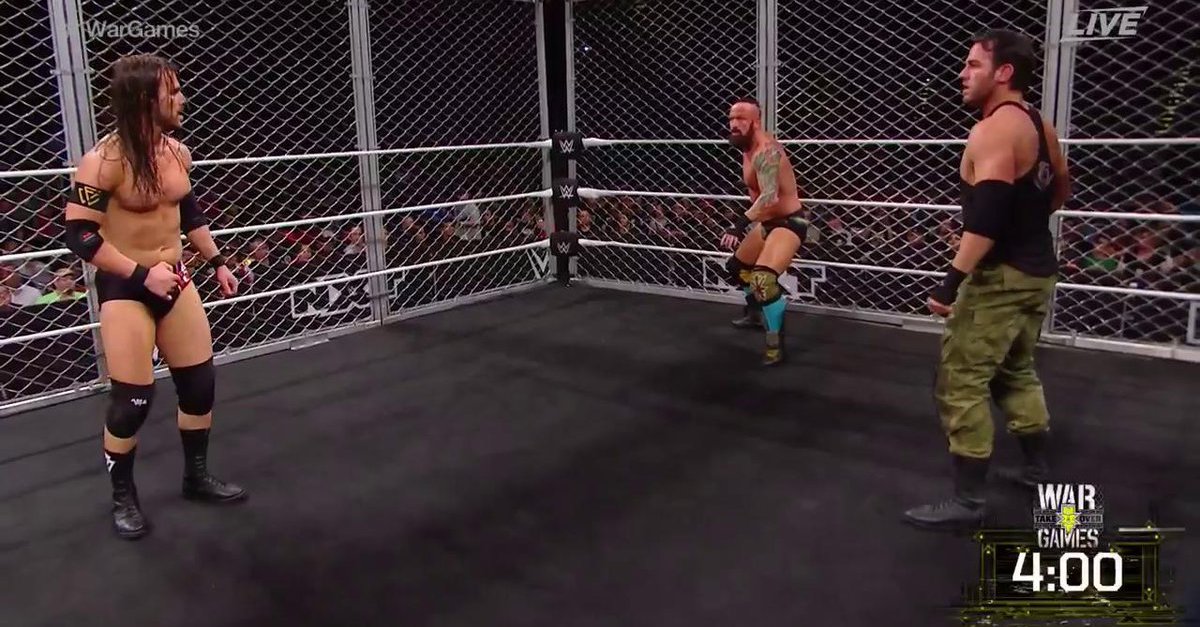 WWE brought War Games back to the squared circle for the first time in nearly 20 years at NXT TakeOver Saturday night in Houston, Texas with The Undisputed Era (Adam Cole, Kyle O’Reilly and Bobby Fish) defeating Roderick Strong and the Authors of Pain (Akam and Rezar) and sAnity (Eric Young, Killian Dain and Alexander Wolfe).

Here were the official rules for War Games:

War Games rules. This should be a blast. pic.twitter.com/PiiMwSWblM

Strong, Young and Cole opened War Games, as their teammates were locked in shark cages at the top of the entrance ramp.

Cole put work in early, beating down Strong and Young, before separating them in the opposite rings. Strong got a bit of momentum going at the end of the first five minutes, when O’Reilly and Fish were allowed out of their cages. They hit the ring and immediately took out Strong, while cornering Young in the other ring.

At the end of the second five minutes, the Authors of Pain hit the ring. Fish and O’Reilly attempted to keep the door closed, but the AoP blitzed through it and wrecked havoc.

Note to self: DO NOT BLOCK THE DOOR when #AOP @Akam_WWE & @Rezar_WWE want to get through! #NXTTakeOver #WarGames pic.twitter.com/ZgrlSWTSAa

After the buzzer signaled the final team exiting the shark cages, Dane and Wolfe littered the ring with weapons, bringing trash cans, chairs, tables and a chain into the ring.

The rest of #SAnitY has entered #WarGames… and they brought presents! #NXTTakeOver #WarGames pic.twitter.com/GKROdMdcPt

Dain took out the Authors of Pain before a two-count was broken up by Cole. He continued in the other ring, wrecking through the opposition.

O’Reilly wrapped a chain around Wolfe’s arm for an armbar, but Young broke it up with an elbow drop. Fish hit a moonsault to break up Young’s pin and everyone was laid out.

Strong went wild, taking out everyone in the ring, and eventually hitting an Olympic Slam on Dain. Cole broke up the pin with a super kick. The men in the ring set up a Tower of Doom in stereo spot from both rings that left Cole in the top rope. The Authors of Pain knocked Cole on the top rope and set up tables in the far ring.

Dain set O’Reilly up in the corner with a trash can and landed the coast-2-coast!

They followed that with Strong suplexing Cole off the top of the cage!

Cole blasted Young with the kendo stick, then as Young was attempting to get to his feet with a chair, Cole hit a running knee strike for the pinfall victory.