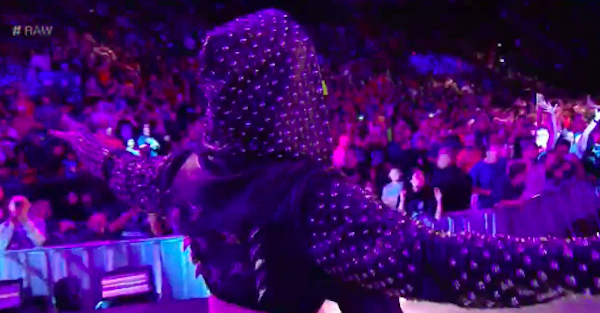 On Monday Night Raw, Paige will wrestle for the first time in more than two years.

Paige is slated to take on former WWE Monday Night Raw Women’s Champion Sasha Banks in her continued reign of terror over the roster alongside NXT callups Mandy Rose and Sonya Deville.

Paige coincidentally teamed with Banks in her last match, which took place on June 27, 2016, in a win over Charlotte and Dana Brooke.

The segment occurred when Alexa Bliss came out to discuss her Survivor Series loss to Charlotte.

Mickie James, Bayley, Sasha Banks and Alicia Fox all came out to all stake their claim as the No. 1 contender for the Monday Night Raw Women’s Championship. Bliss said not one of them deserved to compete for her title before Kurt Angle announced a Fatal 4-Way for the No. 1 contender spot.

With all four women laid out, Paige made her shocking return.

Paige announced she was back, leading to a “Welcome back,” chant. She said she didn’t come alone and started walking to the ring as NXT’s Mandy Rose and Sonya Deville also hit the ring.

Paige hadn?t appeared on WWE programming since June 2016, prior to undergoing neck surgery in October. She’s been back training, according to the Wrestling News Observer.

Paige, who hasn?t wrestled in more than a year, has reportedly gotten clearance from WWE doctors to compete and has been training at the Performance Center this week in preparation for a comeback.

?Paige was at the Performance Center this week training for a return. I believe she has gotten full clearance and now it?s just getting back into shape. She?s been out of action for more than one year with neck problems that led to her having surgery. There is said to be a storyline for her return and tentatively it?s on Smackdown.?

It?s worth noting that Paige was originally drafted to RAW, but hasn?t appeared on WWE television since prior to last year?s draft, so a move to SmackDown Live would make sense with the division lacking star power outside of Charlotte Flair, Becky Lynch and current Women?s Champion Natalya.

The self-proclaimed ?Anti-Diva? has provided several updates of her road back to the squared circle recently, which included announcing that she?d be training at the WWE Performance Center.

She served two suspensions for violating WWE?s wellness policy within two months in early 2016, but clarified both incidents were due to medication with prescriptions and doctor?s notes.

Paige was the first-ever NXT women?s champion and became the WWE Divas Champion twice during her time in WWE, which included winning the title on her main roster debut in 2014.