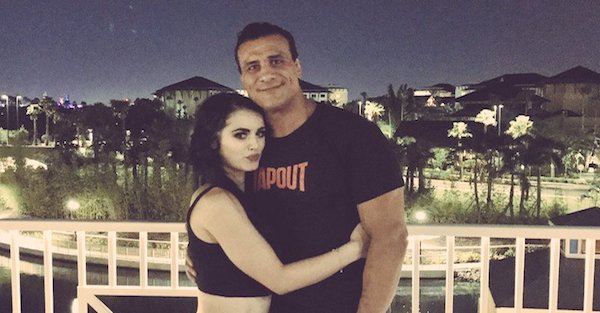 According to TMZ, the State Attorney’s Office for Florida’s 9th Judicial Circuit has told the website that the case facing the former WWE Divas champion is closed because the alleged victim (El Patron) refused to press charges against his fiancée.

Initially, El Patron was considered a suspect in the police investigation over an airport altercation in July between he and Paige. However, a representative for the Orlando Police Department confirmed that the website that the detective?s investigation determined that Paige was the one who should be charged for domestic violence and that El Patron is no longer under investigation.

Last month, Pro Wrestling Sheet reported that charges could be filed against the former Diva?s champion:

?A rep for the Orlando PD tells us, ?OPD detectives have found that probable cause exists to charge Saraya Bevis with Battery (Domestic Violence). Detectives have sent the information to the State Attorney?s Office for review and the SAO will determine whether to file charges in the case.?

El Patron was suspended indefinitely by GFW after news of the incident became public and remains suspended.

Paige updated her injury status during an interview with KENS 5?s Chelsey Hernandez earlier this month at the Malik Rose Bowl Tournament.

The former Divas Champion said she is hoping to return ?soon,? although it will ultimately be a decision made by WWE?s medical staff.

?Hopefully within the next couple of months, fingers crossed,? Paige said. ?Now I have to get cleared by WWE doctors.?

Earlier this month, Dave Meltzer of the Wrestling Observer reported that Paige was slated to return ?as soon as she is medically cleared,? despite numerous incidents that have put her career in jeopardy.

As soon as she is medically cleared https://t.co/LgdISAdsrO

Paige hasn?t appeared on WWE programming since June 2016, prior to undergoing neck surgery in October.

She served two suspensions for violating WWE?s wellness policy within two months in early 2016, but clarified both incidents were due to medication with prescriptions and doctor?s notes.

Neither WWE or GFW has commented on the current status of either performer.

Paige was the first-ever NXT women?s champion and became the WWE Divas Champion twice during her time in WWE, which included winning the title on her main roster debut in 2014.