Ronda Rousey officially has a match set for WrestleMania 34 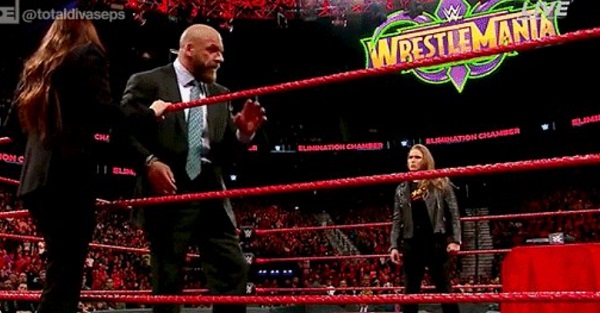 Ronda Rousey was at WWE’s Elimination Chamber show on Sunday night, with the expectation that she would publicly sign a WWE contract.

That situation quickly escalated, though, as Rousey was given more than a contract: she was given a match at WrestleMania 34 in New Orleans… something that Rousey didn’t expect, apparently. (storyline, guys!)

Sensing that something was up, Rousey asked those in the ring — Triple H, Stephanie McMahon, and Kurt Angle — what was up and Angle spilled the beans: that Triple H and Stephanie had brought her to WWE to manipulate her.

After a war of words and some stare-downs, Rousey put Triple H through a table and scared off Stephanie right before she signed her official contract.

.@RondaRousey just did THAT. pic.twitter.com/lD9wxK0KrR

Rousey vs. Stephanie at WrestleMania? Or Rousey and Angle vs. Stephanie and Triple H? Either option is fun, and it will be nice to finally get a look at how Rousey does in a WWE ring.