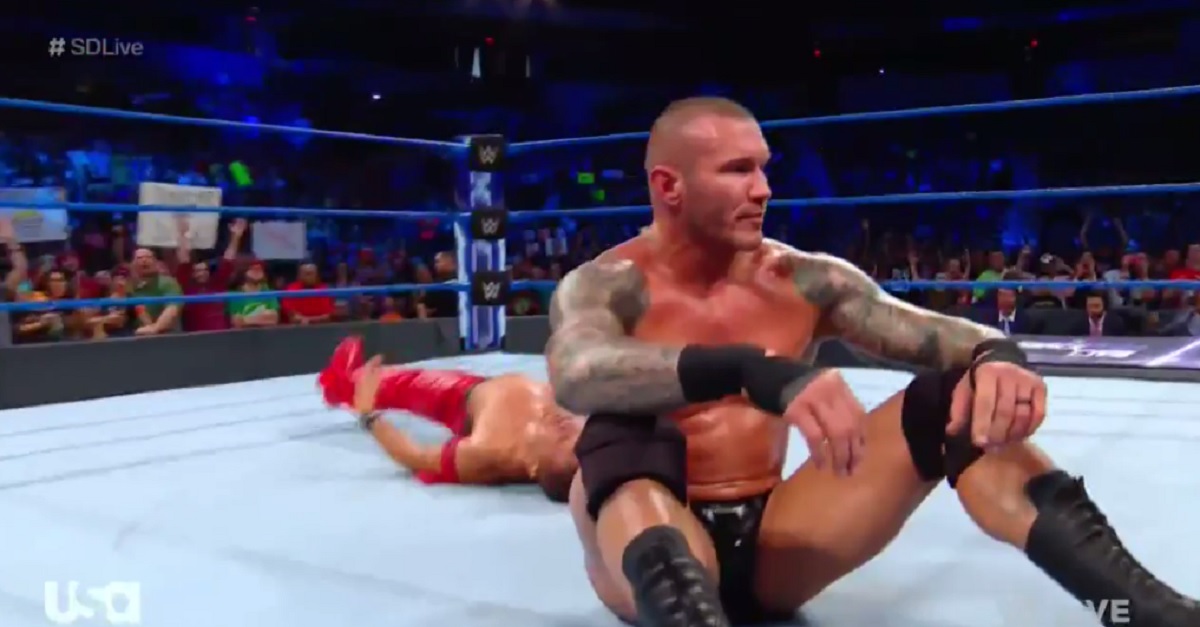 WWE Champion Jinder Mahal opened the show with the Singh Brothers. Mahal gave his usual heel speech before the Singh Brothers interrupted and apologized for losing to Shinsuke Nakamura last week. Eventually Nakamura interrupted himself, with Randy Orton and Rusev later running in to set up the night’s main event…

They did Nakamura’s entrance during a commercial break, which… seems like a waste of a sweet entrance.

To make up for it, the match started off chaotically, with Orton throwing Rusev out of the ring and Nakamura throwing Mahal into the timekeeper’s area, only for another commercial. They were back for two whole minutes between breaks!

Eventually the full match got underway, with Rusev and Mahal pulling the usual heel tricks like distracting the referee. After the standard TV tag match, Nakamura hit the Kinshasa kick on Rusev to get the pin, and the show went off the air with Orton and Nakamura staring each other down before Orton hit the VINTAGE RKO out of nowhere to close the deal.

Orton and Nakamura will face off one-on-one next week in a No. 1 contender’s match for the WWE Championship.

This was Benjamin’s television in-ring return to WWE after being away from the company for over seven years. The match went through a commercial break as the Ascension mostly worked over Gable until Benjamin was able to get a tag. Benjamin got the pin after hitting an assisted STO from Gable.

Gable and Benjamin showed some potential at having good chemistry together. Something to watch for will be to see how long WWE decides to keep the two together as a team before exploring potential singles runs.

Baron Corbin was show backstage hoping to vie for the U.S. title in A.J. Styles’ Open Challenge later. Corbin, however, was cut in the line by Tye Dillenger, leading to…

Short match that eventually saw Styles lock in the calf crusher for the submission. Corbin again interjected himself after the match, resulting in a stare down between him and Styles. Poor Dillenger… got beat up by both guys and got nothing from it.

Mike and Maria Kanellis made an appearance for the first time in a few weeks. Mike was quickly dispatched by Roode, who won with the Glorious DDT. WWE apparently has big plans for Roode, as they should, so this was your standard match to help establish the new guy in the territory.

SmackDown went to commercial after that match and came back with Aiden English suddenly singing in the ring. English’s performance was broken up by the guitar riffs of Kevin Owens’ theme song. Owens kicked English out of the ring, and the complained about Shane McMahon getting involved in last week’s U.S. Championship match.

Shane’s theme hit and he scurried out from backstage. He pretty much told Owens to shut up and get on with his life, and signed the castaway English to a match with Sami Zayn.

This match went about 90 seconds until Owens, who was on commentary, jumped into the ring and ripped the striped shirt off of the ref and claimed himself as the match official. Zayn was clearly confused by the change, and Owens used that opportunity to powerbomb Zayn and allow English to get the pin with a quick three count.

To get this out of the way: despite injuring his knee over the weekend, Xavier Woods was ringside with the rest of the New Day and walking around with a brace. He did not participate in the match.

The match…. was really disappointing considering what the teams have been doing recently. The short match saw the Usos get the rollup pin on Kofi Kingston, so they will get to choose the stipulation for the inevitable title rematch between the two teams.

Some lighthearted chants of “Let’s go jobber!” for Stock… this didn’t last long, as Tamina got the pin and then botch throwing stock out of the ring afterwards. Brutal segment.