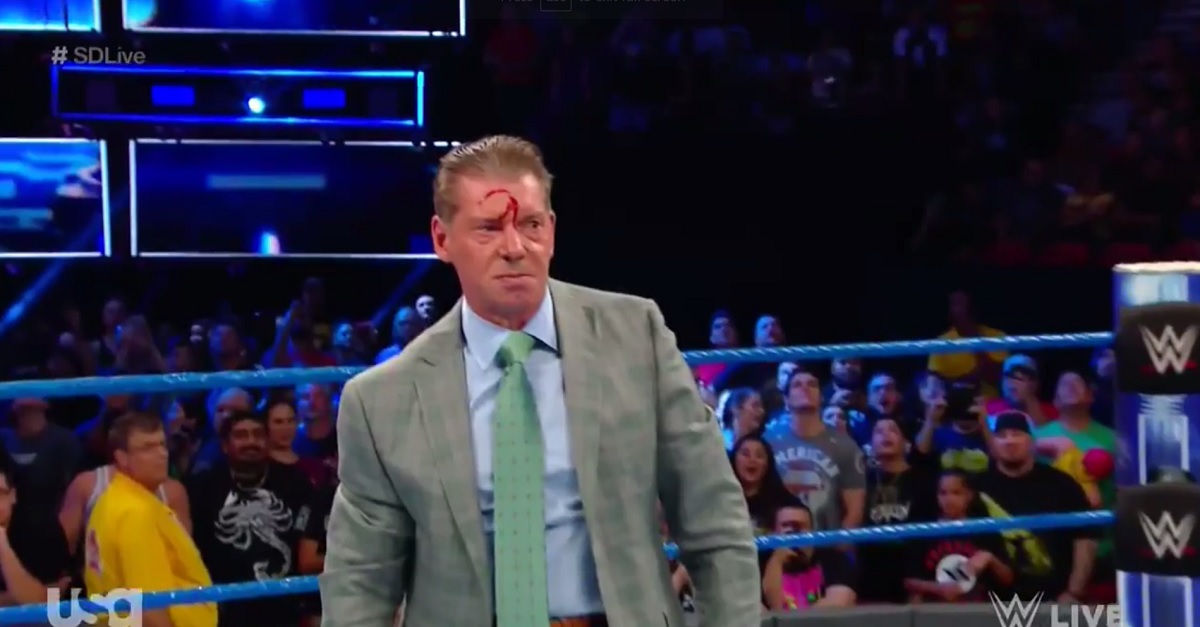 SmackDown Live was broadcasted live on Tuesday, September 12, 2017 from the Thomas & Mack Center in Las Vegas.

The show started off by replaying last week’s brawl between Shane McMahon and Kevin Owens. That led into Owens making his entrance, welcoming the crowd to the “Kevin Owens Show” amid his “lawsuit” against everyone that matters in WWE.

Owens went on a tirade of improvements that he would make to his show, including firing Sami Zayn. Owens then called out Mr. McMahon, only for Shane McMahon’s music to play much to Owens’ chagrin. However, Dolph Ziggler came out doing his whole multiple gimmick shtick. Super funny.

Daniel Bryan finally walked out to the ring to calm all the nonsense. Bryan informed Owens that he runs the show, not Owens, and that Mr. McMahon would be there very soon. He wasn’t there until the end, but…

After a jovial appearance, McMahon got angry, telling Owens that he should backoff his “lawsuit” after his scuffle with Shane McMahon last week. McMahon then said that he would fire Owens if he tried to sue, and that the only reason he suspended Shane last week was because he didn’t finish the job.

McMahon announced that the two would be facing off at the Hell in a Cell show on October 8 in Detroit, Mi. After which, Owens turned the tables on the CEO by bloodying him up with a headbutt. Owens then hit McMahon with a superkick and a frog splash to leave him laying.

That was a mouthful…

Another awesome match, which has been the theme between these two teams. The streetfight was your regular no-DQ with a ton of weapons, and both teams used them to great effect, particularly Kofi Kingston going crazy breaking a kendo stick over Jimmy Uso and then throwing a chair straight into the face of Jey Uso.

After getting control, the Usos were going for the double-splash off the top rope before Kofi pushed Jey Uso off the top rope and through a table set up on ringside. The New Day then hit the Midnight Hour off the top rope on Jimmy to get the pin and win their fourth tag-team championship.

They showed Ronda Rousey ringside before the match to hype up the finals of the Mae Young Classic tournament after the show. Rousey got a huge reaction from the live-crowd, so those thinking that her popularity is over after a couple of losses in UFC are probably wrong.

The match was less than great, and partially suffered due to a large part of the match being during a commercial break. There was a good moment to end the match, as Natalya got the win with the Sharpshooter while staring down Carmella — the current Money in the Bank holder — who was at ringside.

This was the match that Styles promised to Dillinger last week. Dillinger took most of the match early, working over Styles’ back and neck more than anything. Styles turned the tables with a powerbomb. Baron Corbin interfered as Styles was going for the Phenomenal Forearm, leading to a great sequence where Dillinger hit his finisher — the Tye Breaker — to a 2.9 count that the crowd totally went for. Awesome moment.

A frustrated Dillinger went for the move again, but Styles got the Calf Crush in for the submission. Styles and Dillinger shook hands after the match before Corbin interfered again, knocking down both men.

Two important things about this match: Gable and Benjamin may have debuted a new tag team finisher with their take on a modified Doomsday Device. After the match, Rawley went for the handshake with his opponents while a disappointed Ryder just walked off.