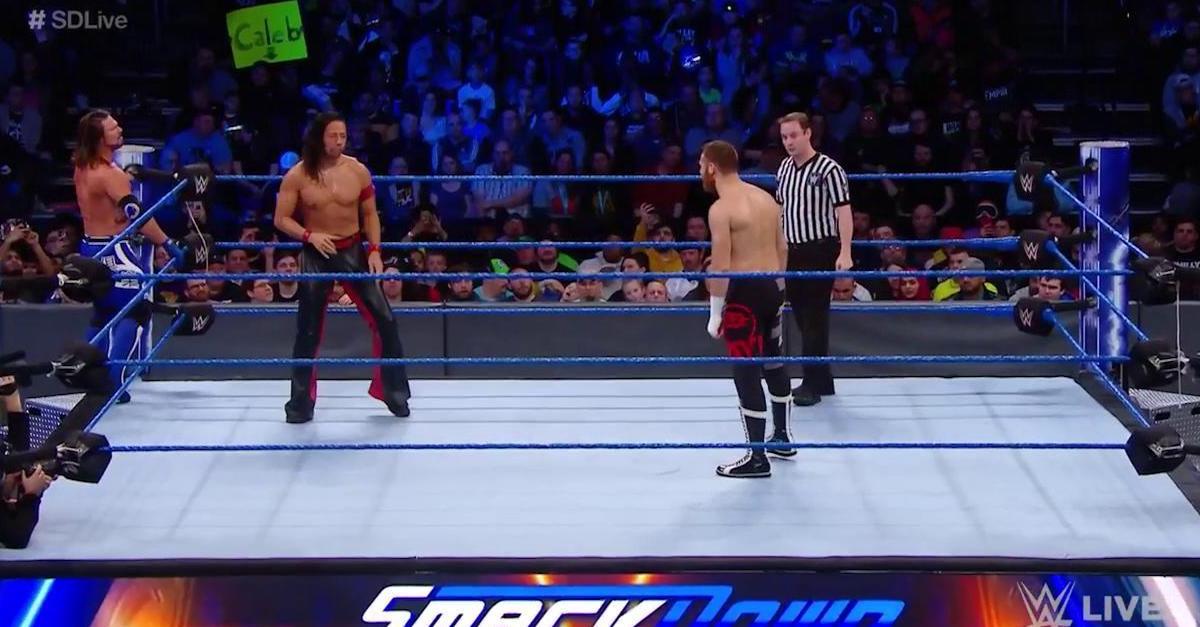 Smackdown Live recapped the Royal Rumble and opened with the No. 1 contender for the WWE Championship, Shinsuke Nakamura. Kevin Owens and Sami Zayn came out to complain about getting screwed out of the title after the referee counted the wrong man to the mat against Styles.

Styles hit the ring and offered to team with Nakamura against Owens and Zayn. Zayn and Owens said “nope” and Nakamura and Styles knocked them off the apron. Back from commercial break, general manager Daniel Bryan made the tag match in the main event of Smackdown Live.

Bryan announced Kevin Owens vs. Sami Zayn in the main event of next week’s Smackdown Live, and whoever wins, will face Styles for the WWE championship at Fastlane.

The fatal 4-way found its way to the outside, with Kofi Kingston and Zack Ryder taking to the air on Jinder Mahal. Rusev went to follow suit, but his leg was grabbed by Sunil Singh. The referee had enough of Singh, Xavier Woods, Big E and Aiden English, and tossed the four valets from ringside.

Ryder connected on the Broski Boot to Rusev, but Mahal took out the former Intercontinental champion with a boot of his own. Kingston jumped back into the ring and hit the New Day Boom Drop on Mahal, found his way into the S.O.S. on Ryder and went for the pin before he was taken out by Mahal. Rusev knocked Mahal out of the ring, then set up for the Accolade on Ryder and Kofi. Mahal jumped back into the ring and knocked Rusev down. Ryder hit the Rough Ryder on Mahal, Rusev superkicked Ryder and Rusev locked in the Accolade to tap Kofi to become the No. 1 contender for Bobby Roode’s championship.

Charlotte cut a promo on the Women’s Royal Rumble and Ronda Rousey’s debut. Charlotte asked who would be standing across the ring from her in New Orleans at WrestleMania, and the Riott Squad’s music hit. Ruby Riott, Sarah Logan and Liz Morgan beat down Charlotte.

Carmella came running down and tried to cash in her Money in the Bank briefcase. She went to kick the Charlotte, and accidentally hit the ref. As the ref failed to get up, Charlotte got to her feet and Carmella took her briefcase back up the entrance ramp.

Ms. #MITB @CarmellaWWE just knocked the referee out of commission while attempting to cash in! #SDLive pic.twitter.com/hxCdfCH2ud

"SEE HOW WELL YOU DO WITHOUT YOUR GUARDIAN ANGEL!"

Zayn walked up to the top of the ramp, then came back to the ring. He and Owens continued arguing, and Styles knocked Owens into Zayn.

Has a wedge been driven between them ahead of their match NEXT WEEK to determine @AJStylesOrg's #WWEFastlane opponent?! #SDLive pic.twitter.com/4peDx7CPnL

Zayn got angry again and left the ring, as Owens took it to the WWE champ. Styles made the hot tag to Nakamura, who beat Owens around the ring. He set up for the Kinshasa, but Owens rolled out of the ring. Styles rolled him back in and Nakamura hit the Kinshasa for the pinfall.